All this week, we’ll be counting down to the opening of MagicFest 2017.

The festival, which is the UK’s biggest magic event, returns to Edinburgh this Friday. Ahead of the opening night, we’ll be chatting to some of the fascinating magicians and illusionists on this year’s line-up to find out what it’s actually like to work in one of the world’s most mysterious industries.

First up is Billy Reid, one of the country’s best close-up magicians, who is set to perform at MagicFair this weekend and at The Secret Room at Riddles Court.

Can you tell us where your initial interest in magic came from?

We used to go on family holidays to Blackpool when I was a kid. When there, I’d visit JB Magic, which was one of Europe’s best magic shops, and it was during one of these visits when I was 10 years old that I got hooked on magic.

My initial interest cooled after a few years until I saw David Blaine’s first special on TV. As I watched, I realised I could perform many of the same magic tricks, and here was a guy making a million dollars on TV whilst my cards gathered dust in a drawer. I think that was the defining moment in my magic career!

What was it about magic that appealed to you?

There are many reasons why I love magic… firstly, I’ve always been a bit of an entertainer, performing in various shows throughout my school life. I love making people laugh, and have an interest in writing and 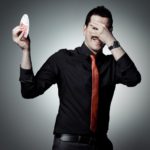 comedy. I get to combine all these things with magic.

I also love that fact magic is a universal language. The minute you fan a deck of cards in front of someone they know they’ve to select a card and something magical will hopefully happen.

In terms of magic, who is your biggest inspiration and why?

David Blaine, as previously mentioned, played a huge part in my initial interest in magic. In my early twenties, I met a magician called Alan Duncan, by sheer chance, and he sort of became a mentor to me. He taught me how it was equally important to be entertaining as it was to perform great magic. I don’t think I am the best magician in the world, but I think I have a way with people that helps set me apart, and Alan has a lot to do with that.

Finally, and I’ll never hear the end of this, but our very own Kevin McMahon/Quantum is someone I’ve always admired and respected. He’s done so much for magic in Scotland and has shown great faith and confidence in my ability allowing me to perform my magic for many more people than would have been possible without his support.

Pursuing a career as a professional magician is quite an unusual career choice. How did your friends and family react when you first told them?

It’s something I’ve always wanted to do, but I got so sick of hearing myself saying “it’s something I am working towards” that even I began to doubt it would ever happen. I had a reasonably well-paid job with great benefits and so it was always a huge step to leave that behind and pursue my dream. However, that’s exactly what I did about three months ago and the rest is history!

You’re now a member of the elusive Magic Circle. How hard did you have to work before being offered membership?

I knew my magic was of a good enough standard to gain entry, but it’s always daunting putting yourself out there.  I’ve twice reached the finals of the Magic Circle’s “Close-up Magician of the Year” competition – a highlight in my Magic Circle experiences!

You’re performing at MagicFest this year. What are you most looking forward to about it?

I love everything about the festival – being around so many talented people, the atmosphere and, of course, performing for audiences who are there specifically because they love magic. I can’t wait!

Finally, how important do you think it is to have a magic-based festival take place in Scotland each year?

The success of MagicFest proves the appetite is there for a magic-based festival. It’s something I and many others look forward to every year… and long may it continue!