As one of musical theatre’s biggest hits, expectations for the Edinburgh run of Kinky Boots were as high as the heel on sparkly red stiletto boot that’s featured on the show’s poster. Thankfully, the touring production is as polished, bold and glitzy as its West End and Broadway counterparts and promises to bring some much-needed sparkle to Edinburgh’s festivities. 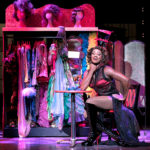 tells the story of what happens when city boy Charlie Price inherits his father’s failing Northampton shoe factory. After a chance meeting with a glamorous drag queen in a local cabaret bar, the pair form an unlikely partnership and set out to save the business by producing a bold range of heeled boots for “ladies, gentlemen and those who are yet to decide.”

While the storyline is fun, it’s the energetic cast, striking choreography and fabulous costumes that propel Kinky Boots into musical theatre’s premier league. Kayi Ushe drives the show with his sassy portrayal of Lola, supported by The Angels, her posse of fellow drag queens. The versatility of Ushe’s talent is evident when he switches seamlessly from playing brash and confident Lola to having his drag persona stripped back to reveal insecure, plain old Simon from Clacton.

Kinky Boots is an explosion of glamorous costumes, synchronised choreography, acceptance and a catchy, feel-good score that will leave you dancing in your seat. This Christmas, it had better be RED.