Even if you don’t know the band’s name, you almost certainly will have heard Walk The Moon’s monster hit Shut Up And Dance.

Mercifully, the Ohio power-popsters have a lot more in their armoury than just THAT song, and they gave off so much infectious energy that the crowd inside the Queen’s Hall on Friday night were dancing from start to finish.

Apart from the sheer ferocity of the performance, what’s obvious is the incredible musicianship of the four-piece, who have clearly paid their dues. 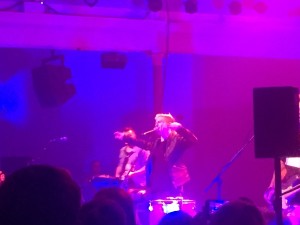 Indeed, while Walk The Moon may look like an overnight success, the rewards were a long time coming.

Since 80s-inflected breakthrough hit Shut Up And Dance took over the airwaves last summer, Walk The Moon’s star has risen exponentially, and they’ve been playing in front of sell-out crowds on tour in support of latest album Talking Is Hard.

Their visit to the Queen’s Hall was no exception, and while there would have been those in attendance who only knew them from their ubiquitous hit single, all will have left as fans.

“We are Walk The Moon, and we’re from Ohio,” said Petricca by way of an introduction. And then it all kicked off.

The setlist on the night included a fair few tracks from Talking Is Hard, including Aquaman, Work This Body and Up 2 U, along with a liberal sprinkling of old favourites like Anna Sun, Tightrope, Jenny, Iscariot and I Can Lift A Car.

The band also delighted the crowd by throwing in an energetic cover of the late David Bowie’s Let’s Dance.

Predictably, though, the biggest cheer of the night was reserved for Shut Up And Dance, which had fans singing at the top of their lungs.

All told, this was a tour de force performance by a band who really know how to connect with their audience. And when the house lights came up at the end it was huge smiles all round inside the venue.