After AAA reported a couple of weeks ago that members of Irish pop groups Boyzone and Westlife were in talks to form a new ‘supergroup’ –  it has been confirmed today.

The two chart-topping bands are to follow in the footsteps of Busted and McFly by forming Boyzlife.

Boyzone’s Keith Duffy and ex-Westlife singer Brian McFadden will embark on a UK tour later this year, kicking off in October.

The tour will include 12 shows in Hilton hotels across the UK (including Glasgow and Aberdeen), kicking off in London on October 16, with tickets on sale from 9am on March 8.

In a press release, Duffy said: “Brian and I have been talking about this for a while so it’s really exciting to finally be able to reveal Boyzlife. We can’t wait to get out on the road and reconnect with our fans, taking a trip down memory lane.” 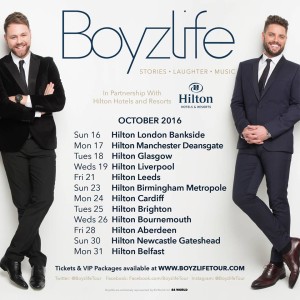 McFadden added: “Keith and I have always been great friends and we’ve wanted to work together for quite a while now. With the amount of stories between us we knew it would make for a great live show, mixed in with a few songs!”

McFadden also hinted that the other members of the two acts might join the supergroup. He said: “We all had a chat [at Ronan Keating’s wedding last year], the lads. We said it would be amazing. Not even just performing together, but can you imagine the craic?”

“Nine of us Irish lads on a tour bus together, going round the world together. It would be absolutely carnage. We all get on so well so you never know. We could end up adding more people to the next one. Right now this is about me and Keith but the door is always open.”

Last month, ex-Boyzone member Shane Lynch tweeted a picture of Boyzone and Westlife, and wrote: “BOYZONE & WESTLIFE i guess this is kinda what the press conference would look like if #Ireland joins forces.”

In October, Lynch tweeted pictures of the two bands – the Boyzone photo included the late Stephen Gately – with the caption: “Although it can’t quite be this line-up.. MAYBE IT’S TIME we Irish joined forces and take back the world.. #BIG.”

Ronan Keating is heading out on a solo tour later this year, but admitted he does miss his Boyzone bandmates.

“I miss the lads at times, definitely,” he said, adding, “Next year marks our 25 years so we’ll do something next year, please God.”

Keating went on to say, “We’re not really sure yet. I mean, we’re looking at different ideas whether it’s an album or a tour, or what it’s going to be, but we’ll definitely mark it somehow and it’ll be a Boyzone extravaganza as per usual.”