Scottish band December have announced the release of their long-awaited debut album, I Will Let You Have Your Say, which is out on 14 May.

The five-piece, who hail from Glasgow, caught the public’s attention recently with a pair of unique fundraising singles, both of which were tributes to two of the band’s idols – U2 and Kenny Dalglish. 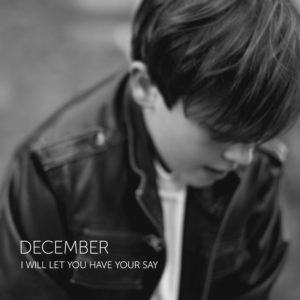 The new album takes on a similar theme, as each track has been written about influential figures that have had an impact on the band and their lives over the years.

“We’re excited to be releasing this album,” says December guitarist Scott Pattison. “In 2014, we wrote a song called Alison Stewart as a thank you to U2 and Ali Hewson and that really led to the album as a project.

“For the first time as songwriters we’ve tried to step into other people’s stories,” continues Pattison. “It’s a collection of 13 songs named after people who have influenced or inspired us. It’s also a reflection on our own lives and our journey through the music business.

It feels like the right time to say thanks to these people and the album is our way of doing that,” he adds. “So from Barack Hussein Obama and Kenny Dalglish to U2, Maria McKee and Mike Scott, this is our way of saying we appreciate you and all you’ve done or stand for.”

December are set to play Glasgow’s Oran Mor on May 14 to celebrate their album launch.

Recently, the band performed their charity single Kenneth Mathieson Dalglish at Celtic Park – with all proceeds going to The Marina Dalglish Appeal. They have also appeared on Liverpool FC TV.

I Will Let You Have Your Say is out on 14 May 2016 and available on iTunes, Amazon and main digital outlets.