The Lauren Mayberry-fronted group returned recently with comeback single Get Out, which was followed by the Matt Berninger-featuring My Enemy. 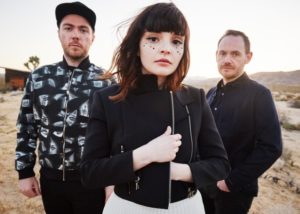 Never Say Die is one of the first songs Chvrches recorded with producer Greg Kurstin for forthcoming new album Love Is Dead — and Mayberry says it’s one of her favourite songs on the new record.

“It’s one of my favourite songs on the record because it really leans into the juxtaposition of what we do — the mixture between the dark and the light,” she says, describing the track as “melodic and direct but uses some of the gnarliest sounds we’ve ever tried.”

Listen to Never Say Die below and check out the tracklisting for Love Is Dead, which is due to be released on May 25.

Mayberry recently spoke about the #MeToo movement – saying that, while she’s pleased that progress has been made against misogyny, society now needs to act.

“It’s great that people are speaking up, but I want to see what happens in the next couple of years – if people actually put their money where their mouth is,” the singer told Pitchfork.

“So many people are being fully genuine about it, but there are some people who are definitely using it as a way of finding some kind of branding niche and that’s kind of fucked up.”