It’s time for our Hottest Record of the Week – and this one’s so hot, you better watch you don’t burn your eyes.

Check it out below. 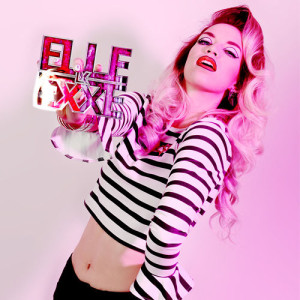 As you’ll see below, Elle’s new video is for Lately is very tongue-in-cheek, and in it she gets lessons in how to work the camera by her very own, magnificently bearded, drag queen impersonator.

Lately is the first single to be taken from the dirty pop diva’s upcoming debut album, Love Fuelled Hate, which released on September 9.

Exploring the concept of love’s transition to hate, the album journeys through a gloriously twisted tale of flirtatious glamour and irresistible lust into the seedy depths of adulterous behaviour and its dramatic conclusion.

Extravagant and adventurous, it’s an invitation into the exuberantly animated world of Elle Exxe, which has already captured the hearts, minds and critical praise of heaps of publications, not least AAA Edinburgh, who were right there at the beginning of her amazing journey.

Check out the video for Elle’s new single below, and then click HERE to read her thoughts about her hometown of Edinburgh.