Scottish synth-pop darlings Chvrches are back with brand new single Get Out – and it’s our Hottest Record of the Week.

The track is a collaboration with Greg Kurstin, the Grammy-winning Producer of the Year for the past two years in a row. 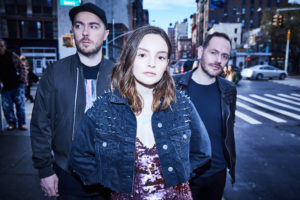 Speaking about their first new single since the 2015, the Glasgow-based electro-pop three-piece say: “Working with Greg was so different to what we’d done before, but it also felt so comfortable and like he’d been in our band forever. He doesn’t try to make you write a certain kind of song.

“He just listens and then Jedi puppet masters the best work out of you. The opening synth riff of Get Out was the first thing to emerge on our first day in the studio with him.”

Get Out is available to stream and download now via Virgin Records (UK) and Glassnote Records (US).

The trio released their breakthrough debut album The Bones Of What You Believe in 2013.

The record debuted in the top 10 in the UK and went on to sell more than half a million copies worldwide.

Its follow-up, Every Open Eye, charted at No.4 in the UK and No.8 in the US upon release, as well as the top 20 in ten other countries worldwide, and was a mainstay of critics’ albums of the year lists everywhere from The Guardian, Q and NME, to Mashable, Entertainment Weekly and Popjustice.

Over the course of their career, Chvrches have played countless shows worldwide, with each tour’s production reaching new heights and leaping towards the top of festival
bills.

The band have announced their first UK show in two years, playing TRNSMT in their hometown of Glasgow on 8 July.

In a recent interview, lead singer Lauren Mayberry revealed that the group’s comeback album – and follow-up to 2015’s Every Open Eye – will be titled Love Is Dead.

She also said they are working on the album with Adele producer Greg Kurstin, who has taken the group in a more pop-driven direction.

“He’s done such big pop records, but they’ve always got a bit of saltiness in them,” Mayberry said of Kurstin’s past work.

“He pushed what we were doing to be bigger in some ways, but he also pushed us to be weirder. He’d be like, ‘If the vocal melodies are as sweet and as precise as this, why don’t we make these other sounds so fucked up and gnarly and strange?’ I loved that.”

Listen to get out HERE