Superstar Adele performed a brand new song during an intimate gig last night – and it’s another tearjerker from the reigning queen of heartache.

The multi-million selling singer, whose eagerly-awaited third album, 25, will be released on Friday (November 20), aired the track, titled Water Under The Bridge, at the Radio City Music Hall in New York.

A fan managed to film the moment and you can watch the footage below, along with another new song, When We Were Young.

Meanwhile, the 27-year-old, who is currently topping the UK charts with million-selling comeback single Hello, has spoken to DJ Zane Lowe on his Beats 1 Radio show about her new material and revealed the track is about her boyfriend. 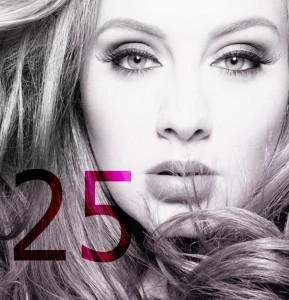 “I feel like with my other albums, because I was so candid and honest in my interviews and so specific about the actually incident or event, I didn’t really think about everyone else and I hurt people’s feelings doing that,” she said while talking about writing new material.

The singer went on to say she tried to write about her son Angelo with long-term partner Simon Konecki, but admits the material was “boring” and her boyfriend told her to “own it”.

Adele said, “He was like, ‘This is your think, like own it, do whatever you want’. Not that I’ve written any songs about any exes, there are a few songs about our relationship, but the actual true meaning behind them is how like brilliant we are and how much of a team we are.

In another interview with chat show host Graham Norton – to be screened on BBC One this Friday (Nov 20) – Adele admits she nearly gave up music altogether.

“I just got really worried that I was never going to make anything that anyone liked again,” she said. “I started to wonder if 21, being so successful, was enough for everyone. But I realised it wasn’t enough for me. So, sorry, I’m here to make your ears bleed again.”

25 is released on Friday, 20 November, on XL Recordings