“Legendary” is overused in the music world, but it’s hard to find another way to describe the Bay City Rollers.

The Edinburgh band sang Shang-A-Lang, made tartan scarves trendy, stole the hearts of teeny-boppers everywhere, and then self-destructed in spectacular fashion before making an unlikely comeback last year.

Alan Longmuir was at the core of the band back in their 70s heyday – and he’s still running with the gang to this day.

The Rollers – and the charming Longmuir in particular – still hold a special place in the hearts of many middle-aged women, and evidence of this will be seen at Le Monde this August, where they’ll be dancing in the aisles during the Fringe run of I Ran With The Gang – a smash-hit play capturing the nostalgia of a period in musical history that will forever be known as the time of  ‘Rollermania’.

The show, written by award-winning playwright Liam Rudden (Thief, Silence In Court, Conflict In Court), is a celebration of those heady days of hit songs, hectic touring schedules, Top of the Pops appearances and the behind-the-scenes pandemonium that followed the Edinburgh band everywhere they went.

At its core, the play reveals the story of Longmuir, the original Bay City Roller, and tells of his rise from working as a plumber to being a heartthrob to millions. But this fun, fast-paced production also features a set of the Rollers’ biggest hits, including Bye Bye Baby, Shang-a-Lang, Keep On Dancing and Summerlove Sensation, and ends with a Q&A with Longmuir himself.

Earlier this week, AAA Edinburgh caught up with Alan to find out what he loves most about his hometown Edinburgh.

Ryries at Haymarket. It was my dad’s watering hole and first place I’d head when returning from touring with the Rollers.

Le Monde Hotel on George Street. It’s my home away from home during every August. Very relaxed. The perfect place to chill with a pint.

I love the Festival. The city is so exciting. i thrive on the buzz.

I could spend hours in the National Gallery. I used to do a bit of painting myself, and even managed to sell some.

The old Odeon. Or the old ABC. Or the old Regal – saw Paul McCartney and Wings there. The Beatles played the Regal too, but I couldn’t afford a ticket.

Has to be the Usher Hall. That where it all started when, as a kid, I sang there in the Tynecastle School Choir. Then at Christmas we did two sold out Bay City Rollers Reunion gigs. I’d come full circle.

Up and over the top of Arthur’s Seat.

I shop for clothes in Edinburgh which always means a trip to see Sandy and Peter at Slaters on George Street.

The Scott Monument. I’ve climbed it many times. Views are always breath-taking.

The Fringe. It’s been a huge part of my life for the last two years thanks to I Ran With The Gang at Le Monde Hotel. I met so many lovely people and really talented actors. And the management and staff of Le Monde always makes Eileen, my wife, and I feel so welcome, like we’re part of their family.

I love my animals, so it has to be Greyfriars Bobby.

A 60’s band called The Beachcombers. They were brilliant.

Tam White. I knew him well, he was a great musician, a great actor, and a great friend. He was also a stone mason. We worked together on the Standard Life Building in St Andrew’s Square when i was doing the plumbing in the 60s.

Home of the Bay City Rollers… and has a castle. 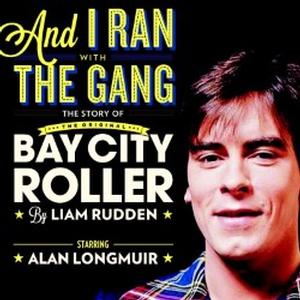