Edinburgh author Irvine Welsh is to turn former Oasis manager Alan McGee’s memoirs on his time running Creation Records into a film, it has been announced.

McGee’s iconic record label, which he ran from 1983 to 1999, was home to legendary bands including Primal Scream, Teenage Fanclub, The Pastels and The Jesus & The Mary Chain. 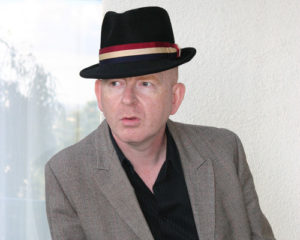 The East Kilbride-born music mogul, pictured right, documented the early days of the label in the 2013 book The Creation Records Story: Riots, Raves and Running a Label.

Now, Variety reports that Trainspotting author Welsh’s script will focus on the “relentless ambition and wealth coupled with mental torment, drugs and eventually bankruptcy,” of the period.

Welsh co-wrote the script with Dave Cavanagh, the author of The Creation Records Story: My Magpie Eyes are Hungry for the Prize.

As yet, no casting decisions have been revealed.

As well as Trainspotting, a sequel for which is currently being shot in Edinburgh and Glasgow, Welsh has also seen his novel Filth turned into a major film starring Scottish actor James McAvoy in 2013.

Over the years, Welsh has directed several short films for bands.

In 2001, he directed a 15-minute film for indie outfit Gene’s single Is It Over, which is taken from the album Libertine.

Five years later, he directed a short film to accompany the track Atlantic from Keane’s album Under the Iron Sea.

Welsh directed his first short dramatic film, NUTS, which he co-wrote with Cavanagh. The film features Joe McKinney as a man dealing with testicular cancer in post Celtic tiger Ireland. It was released in 2007.

Welsh co-directed “The Right to liberty”, a chapter of the documentary film The New Ten Commandments, in 2008.

In 2009, Welsh directed the film Good Arrows (co-directed by Helen Grace). It was written by Welsh and Cavanagh. The film is about a darts player who suffers from depression which causes him to lose his skill.