Following its world premiere in Edinburgh five years ago, the acclaimed Guys Sing Dolls show is returning to the Capital later this month with a star-studded cast.

Anton is best-known for success in 2015’s X Factor, in which he made his mark as a protégé of Simon Cowell. Since his first taste of the big stage at the tender age of eight in a West End production of Bugsy Malone, he has worked with the likes of Tina Turner, Elton John, Cliff Richard and Sting.

The 46-year-old explained: “When you are providing backing vocals, you are presenting someone else’s work, their creation. Now, the tables have turned, and in the last year-and-a-half I have been establishing my own work.

“Guys Sing Dolls will be performed in Edinburgh and is basically a bloke’s take on female songs. Men can be very different in their sensibilities and expectations of love and life, and these songs will be delivered from a different perspective and take on new meaning.”

Anton can already claim success in giving his own rendition of tracks made famous by women, having impressed the X Factor audience with his performance of Whitney Houston’s I Have Nothing and clocked up more than 4.5million views on YouTube of his take on Jennifer Hudson’s I Am Changing (Dreamgirls). The Ghillie Dhu audience will hear him perform another track from the Dreamgirls soundtrack, as well as Not a Day Goes By from the musical Merrily We Roll Along. 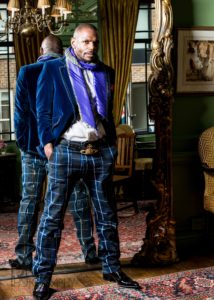 He said: “Simon enjoyed when I performed Whitney Houston’s song, and I had a wonderful message from Jennifer Hudson after I performed her song to say she was looking forward to seeing me perform in the future. Being on the X Factor was crazy. If I’m going somewhere on public transport these days, I have to allocate an extra hour to reach where I’m going because everyone wants to hug me and take selfies.”

Beyond Broadway Production’s Guys Sing Dolls at The Ghillie Dhu will also star Drew Gowland, who is co-founder and director of Scotland’s leading performing arts academy, the Edinburgh-based MGA Academy of Performing Arts, and the link that secured Anton’s inclusion in the Edinburgh Festival Fringe production.

Anton explained: “I first met Drew in 2008 when we were both were cast in the musical Mathilde at Edinburgh Festival Fringe, and now I am a consultant for The MGA Academy in Edinburgh, which he runs. Before the students’ London showcases, where they perform to agencies and casting directors, I give them all advice. The students there are immensely talented, and I have absolutely no doubt some of them, with the focus and talent they have, will go on to be superstars.”

Drew said: “I’m delighted to be performing alongside Anton again, as well as Tim and Gerard. All three are good friends of mine and I’m looking forward to performing the show with them the Fringe and in the future.”

Tim, who has worked in the West End since 1997, said: “The first time we did Guys Sing Dolls was such a brilliant experience and, even though it was more than five years ago, I’m still constantly being asked when it’s coming back. It’s such a great show and I can’t wait to perform in it again. As a performer, it gives me a great opportunity to sing songs that I wouldn’t normally get the chance to. It’s going to be such a fun night and I’m really looking forward to coming back to Edinburgh.”

Gerard, who has previously worked as a vocal coach for Legally Blonde: The Musical and Tonight’s the Night, added: “Guys Sing Dolls is going to be really interesting. I’m looking forward to us all putting our own twists on so many well-known songs. I’ve been trying not to spend too much time listening to the original songs and, instead, I’ve been thinking about how to put my own emotions into them.”