It has been announced that a benefit concert will be held at the Emirates Old Trafford Cricket Ground in Manchester on Sunday 4 June. 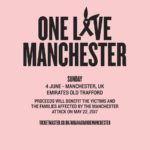 Grande has offered free tickets to those who were in attendance at her concert on Monday 22 May, the night the terrorist attack took place. Eligible fans will need to resister for their complimentary tickets via Ticketmaster before 4pm on Wednesday 31 May, with the remaining tickets being released for sale. Al net ticket proceeds from the show will be donated directly to the We Love Manchester Emergency Fund, which was set up by Manchester City Council in partnership with the British Red Cross.

Earlier this week, Grande penned an open letter to her fans and posted it on Twitter. She wrote: “My heart, prayers and deepest condolences are with the victims of the Manchester Attack and their loved ones.”

Later in the letter, she continued: “Our response to this violence must be to come closer together, to help each other, to love more, to sing louder and to live more kindly and generously than we did before.

“I’ll be returning to the incredibly brave city of Manchester to spend time with my fans and to have a benefit concert in honour of and to raise money for the victims and their families. I want to thank my fellow musicians and friends for reaching out to be a part of our expression of love for Manchester.”