Watch out One Direction, the Bay City Rollers have announced a reunion show at Glasgow Barrowland on December 20 – almost 40 years after their first hit.

The Glasgow gig will be the first in a world tour next year which will take in venues across the UK before moving on to countries such as Japan and America.

One of the biggest bands on the planet for a short but fervent period in the 1970s,  key members of the the Edinburgh pop sensations Les McKeown, Alan Longmuir and Stuart ‘Woody’ Wood broke the news at a press conference at Glasgow’s Grand Central Hotel, organised by Scottish concert promoters CPL and Regular Music. 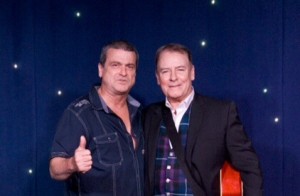 The three musicians revealed details of what has been described as “a very special Christmas present” to all fans who have kept faith with the band over the years.

“We are coming back to entertain those people and the young people who want to see a professional band who were part of pop history.”

McKeown has secretly recorded an album’s worth of material due for release in the coming months.

The new members will add their parts to the songs in the coming weeks, with John McLaughlin brought in to produce.

Wood said: “The songs are fun so the gigs are going to be party time.

“This is the final chapter.”

Longmuir added: “I still get fans turning up at my home in Bannockburn.

“My reaction is that this is brilliant.”

The annoucement comes after a delicately negotiated peace treaty brought the long-feuding members group back together, and also in the wake of a BBC documentary celebrating the 40th anniversary of the band’s rise to superstardom.

Ex-drummer Derek Longmuir, 64, will not be joining the reunion, though.

He quit the music business, and the burgeoning success as a solo artist for songwriter Eric Faulkner, 61, will also see him giving the reunion a miss.

The Bay City Rollers  were managed in the 1970s by convicted paedophile Tam Paton, who was blamed by the band for poor record contracts.

The band enjoyed worldwide hits with Bye Bye Baby, Shang-a-Lang, Keep On Dancing and Summerlove Sensation, but quite what happened to the millions they raked in is still a matter of contention today.

The Rollers still hold a special place in the hearts of many middle-aged women and, as such, there is expected to be huge demand for tickets to their comeback show.