Tickets for the Bay City Rollers’ much-anticipated comeback gig sold out in a staggering three minutes as fans scrambled to get hold of briefs to see the legendary band perform at Glasgow Barrowland on December 20 – prompting promoters to add a second, and then THIRD show.

Regular Music head honcho Mark Mackie, who is promoting the gig, said: “Stunning response… Rollermania is very much alive and well, we have now “rolled” on to a second show, Monday 21st December after the first date sold out in just three minutes.”

The overwhelming response led promoters to add a third date – on December 22 – after the second show sold out in minutes.

But when fans also snapped up those tickets, promoters added yet another show to take place on December 23. 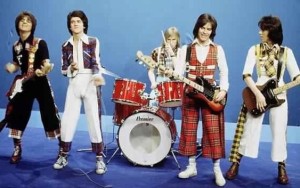 The Glasgow gigs are expected to be the first in a world tour next year which will take in venues across the UK before moving on to countries such as Japan and America.

One of the biggest bands on the planet for a short but fervent period in the 1970s,  key members of the the Edinburgh pop sensations Les McKeown, Alan Longmuir and Stuart ‘Woody’ Wood broke the news of their return earlier this week at a press conference at Glasgow’s Grand Central Hotel, organised by Scottish concert promoters CPL and Regular Music.

McKeown said: “I think it is going to be great. We are coming back to say thanks to the fans that were there when I was 17, Woody was 16 and Alan was 20.

“We are coming back to entertain those people and the young people who want to see a professional band who were part of pop history.”

The Edinburgh pop sensations became one of the most successful pop groups of all time after they burst upon the scene in the early 1970s, selling an estimated 70 million records.

They enjoyed a string of No.1 hit singles and albums all over the world, including Bye Bye Baby, Shang-a-Lang, Keep On Dancing and Summerlove Sensation.