“For the first time, we wanted to use the studio as an instrument, to make it feel like it was part of the band.

“We’re trying to feel like it’s our first album again. We’ve still got balls. We’re still here to get in your face.” 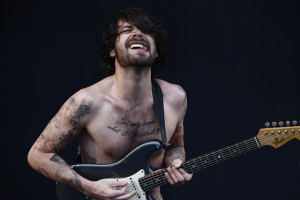 The band, who will play their biggest outdoor show to date at Glasgow’s Bellahouston Park on Saturday, August 27, went down an absolute storm when they headlined last year’s Concert In The Gardens Hogmanay show in Edinburgh.

Ellipsis is the follow up to 2013’s double album, Opposites, and will be released on July 8 via Warner Bros Records and 14th Floor Recordings.

In a press release, Neil says of the new song: “Wolves Of Winter is about us being wolves on a patch and if you come onto that patch, we’ll tear you limb-from-limb”.

Speaking  to NME recently, Neil promised the new album will sound as “fucked up” as possible, describing it as the “best record we’ve made”.

“We wanted to force ourselves to take a left turn, keep ourselves guessing,” he continued. “For the first time ever we’ve been messing around properly with programming, so rather than making the heavy parts heavy with guitars and distortion, we’re trying to find different ways to make things intense.

“It’ll be leaner and meaner than the last – no orchestras,” he added. “This album is going to be the opposite of cinematic. It’s going to sound like Biffy, but it’s about ‘rocking’ instead of ‘rock’.

“It’s the first album where I’ve tried to come out fighting, give the people who’ve upset me a bit of what-for. I feel like this one is me saying that I know who I am, here are my strengths, here are my flaws, it is what it is… It’s fight rock, pint-in-the-face rock.”