Until he became franchise-entrenched as Captain Jack Sparrow in Hollywood’s swashbuckling Pirates of the Caribbean series, Johnny Depp largely shunned big roles in favour of quirky character-actor numbers. In Black Mass, he’s back with another mainstream offering that’s got him tipped by critics for a fourth Oscar nomination for his role as notorious mobster James “Whitey” Bulger. 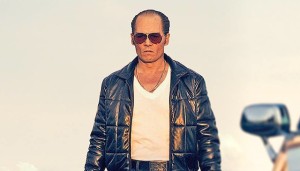 Scott Cooper’s stylish and oft-bloody crime thriller makes a gripping yarn out of its fact-based story – and chameleonic actor Depp steals the movie with a genuinely chilling, career-best performance.

John Connolly (Joel Edgerton) grew up on the streets of South Boston and returns to the area in 1975 as an FBI agent under Charles McGuire (Kevin Bacon). On his return, Connolly finds the city under the control of the notorious Winter Hill Gang, led by childhood pal Bulger (Depp), and his badass cronies – Stephen Flemmi (Rory Cochrane), Johnny Martorano (W Earl Brown) and Kevin Weeks (Jesse Plemons).

Bulger offers up intelligence on the Mafia and the police act upon the information to try to take them down, but things soon spiral out of control, leading to much bloodshed and, ultimately, to Bulger making the FBI’s Ten Most Wanted List.

Depp’s resemblance to bald-headed Bulger is uncanny thanks to prosthetics used to recreate the gangster’s unusually light skin and eyes, and the actor has said he took on the role of Bulger simply “for the joy of the part. I was fascinated by him for years. He ended up on the FBI’s Most Wanted list after informing for them. How did he evade justice for so long?”

The challenge, he has said, was to find “the essential humanity of the man – not to play him like a bad guy or a killer… I think violence was his business and he didn’t understand anything else. I call it the light switch going on and off – that he could make those violent decisions and then just carry on with his family.”

Depp’s willingness to take on challenging roles has always been admirable, and whether or not you buy into the “return to form” headlines his performance in Black Mass is generating, he may be about to finally get his hands on the first Oscar of his 30-year career.