Born To Be Wide returns to the Edinburgh International Book Festival tonight (23 Aug) with a free evening of interviews and live music at the Unbound Spiegeltent.

The talk show is hosted by Olaf Furniss and his guests include veteran music journalist, Sylvia Patterson, who will be talking about her book I’m Not With The Band.

Along with Honeyblood frontwoman Stina Tweeddale and Where You’re Meant To Be director/writer, Paul Fegan, she will also be take part in a discussion about how approaches to writing differ for song lyrics, books and comedy. 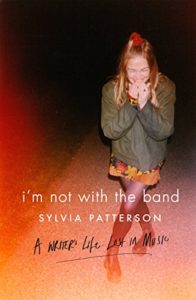 Your book I’m Not With The Band came out a few weeks ago. Can you describe it in three sentences?

One woman’s search for the meaning of life through thirty years in music journalism. She thought rock ‘n’ roll degenerates could help her find The Answer. They couldn’t.

You’ve written for numerous publications including Smash Hits, NME, Q, The Big Issue, Glamour and The Sunday Herald. What led you to write a book?

Music journalism is a dying “profession”, like being a gas lamp lighter in the era of electricity. I had eyewitness accounts of its golden eras in the 80s and 90s (when irreverence ruled) as well as far too much experience of its gradual and now escalating decline where the miseries of tabloid sensationalism have ruined everything. I thought a book could show us how we got from there to here, from comedy capers to a cynical world, the light of the LOLs growing ever dimmer in these shadowy showbiz times.

What was the high-point of you career… and the low point?

High point surely staying the night at Spike Milligan’s house in 1996 after he turned up two hours late (he’d been at the docs). “Why don’t you just stay?” said my lifelong comedy hero. “Do you have a nightie? We could have some dinner…and some wine!” He got posh bottles out for he and his wife. And a box for me. “You can see we’ve left you with the crappy stuff,” he twinkled.

Low point possibly waking up in Reading A&E in 1999, on E, having bust my right arm clean in two post festival reviewing (by just falling off a kerb in stupid shoes). I was then told the nerve damage was so bad I might lose my arm altogether. “Are you right-handed?” the doc wanted to know. Of course I was right handed!! Mercifully I still have the right arm I write with today.

You have met many of the world’s biggest music stars including Madonna, U2, Prince, Beyonce and Britney Spears. What was your best interview experience… and the worst?

Bono was a revelation because he realised he was an even more preposterous concept than everyone else thought he was. He actively encouraged taking the piss. “If your version of being true to yourself is making an eejit out of yourself,” he mused with a Guinness in Dublin, “then I think you’ve just got to go there.”

The Worst was always Jon Bon Jovi, a pompous megalomaniac who loathed Smash Hits and its “stoopid questions”. I once wondered if he’d ever been sick in his cowboy boots as T’Pau’s magnificent Carol Decker recently had. “She puked in her boots?” he withered. “Poor kid. I always make the sink.” Then again interviewing Britney here in the 21st Century is significantly worse: pre-approved questions and up to four of her “people” listening in making sure nothing interesting or real is ever said about anything. Tragic.

How has music journalism changed since you started out in the 80s?

It’s unrecognisable. In the olden days music journalism and music mags were portals to not only music but all the arts, and to idealism and a political worldview – music as a way of life. Any hoary old notions we once had about music being part of the “counter culture” are now gone in the digital free for all where music is a part of Entertainment Culture. Fame, too, has been fatally devalued and the musical stars today both understandably suspicious of all media and hideously PR controlled. Musing last year on negative journalistic agendas and the brutalities of social media, Adele described contemporary fame as “toxic” and “frightening”.

You are originally from Perth. Do you keep up to date with Scotland’s music scene and are there any new acts you particularly like?

Best band in Scotland are Perth’s mighty The Curtains; Mark E Smith juggles Beefheart’s beans up a psychedelic gum tree, on Pluto. Played Pitcairngreen recently and the crowd, I’m told, “were bouncin’ off the walls”.