A legend of the Capital’s music scene and beyond, we could write a whole book about Bruce Findlay’s life (and maybe one day we will), but he’s perhaps best known as the founder of iconic music store Bruce’s Record Shop and as the former manager of Scottish rock band Simple Minds, who he guided to world domination in the 1980s. Earlier this year, Bruce was (quite rightly) honoured with an ‘Outstanding Contribution to Music’ award at the inaugural Scottish Alternative Music Awards.

When you get to my age, there’s so bloody many. I think it may well be the opening of the Commonwealth Games in 1970. They became ‘The Friendly Games’, and it meant as much to Edinburgh at that time as the Commonwealth Games in Glasgow recently. I went to the opening ceremony. Frank Bough, the main BBC commentator, who I knew quite well, used to come up to Frederick Street and I would bump into him and the two of us would go and have lunch. Another one would be when I sold tickets for the first Led Zeppelin concert in Edinburgh, which was at the Usher Hall. Heriot Watt put the gig on, and they were frightened they wouldn’t sell enough tickets, so they asked me if I could sell tickets from my record shop – this is about 1969 or 1970. I said, ’sure’ so I got 1000 tickets and they sold out in minutes. They were the biggest-selling act on record at the time – at the time of Led Zeppelin II. My commission was two tickets for the gig – that’s all I got. But it was an event and a half – fantastic.

[Without hesitation] Nile Rodgers. I think he’d be fantastic. One of the things I love about Edinburgh’s Hogmanay, is that it’s quite gay – and I mean that in both senses. I love the fact it’s very upbeat. I think the best music for Edinburgh’s Hogmanay is dance music. I love rock music, obviously, and one of my own ex bands, Simple Minds played there and did really well. Garbage would be fantastic as well. There’s lots of bands I can see headlining that are wonderful and would be wonderful, but it’s a party, and you want party music. Pet Shop Boys were sensational. Even Bjorn Again, a covers band, were fantastic. Everyone knew the songs and was dancing, and when you see everyone dancing – grown, old men like myself, big fat guys, wee skinny guys, boys and girls… well it’s just fabulous. So yeah, Nile Rodgers and Chic.

What? [Laughing] Style bars are a new thing to me. If The Basement is a style bar, then I would pick that. I’ve gone there since it became The Basement. It’s local to my office, so I quite often go there.

Ondine [George IV Bridge]. I love Ondine. It’s posh, but it’s down-to-earth. I know the guy who owns it, and he’s such a nice guy. I love the food – their fish, their oysters. The staff are great as well, and it’s a great location.

I love the Festival. I LOVE The Festival. I defy people not to love the Festival. People get fed up with it – and I do sometimes feel for people in Edinburgh that are not into culture, or who are too poor – but what I love is the atmosphere it brings. I grew up in Edinburgh, and I remember as a wee boy, back in the Fifties, just walking about and breathing it all in, taking in all the different accents. It was just such a wonderful time wandering around… everyone looked exotic to me, hearing them speaking in French accents, or even American accents. So yes, the Festival has always been exciting to me. I know it can be a pain in the ass to get through because of all the street stuff that goes on at The High Street, but it’s colourful and exciting and it just feels like the whole world comes to Edinburgh during the month. It feels like we’re the centre of the universe… it’s fabulous. It makes the streets feel alive, and because I live in the city centre, I love walking through the crowds when the Festival is on… I just think it’s so exciting.

The Modern Art Gallery. It puts on great exhibitions, and also it’s got a great restaurant. It’s a great place to meet for lunch. On a nice, sunny day, a walk along the Water of Leith and up the steps to the gallery, and sitting out on the terrace at the gallery is a great way to spend a day.

Probably The Cameo, because it’s sort of arty. And The Dominion – again, because it’s quirky and has wide seats. Otherwise, cinemas are all the same to me. 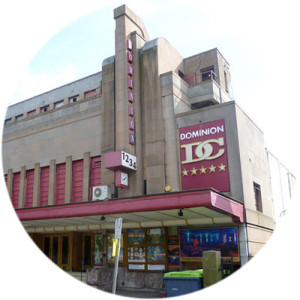 [Long pause]… Probably Sneaky Pete’s. It’s not comfortable, but it’s a great place to discover new acts. Even acts that are quite biggish, acts that can pull four or five hundred people, will often choose to play there for an EP launch or something. That’s because it’s hip. I like it because of that. It’s slightly cool and you get alternative type bands there. I used to love La Belle Angele, but it’s not really found itself again since it reopened. In terms of comfort, I’d pick the Voodoo Rooms. It’s still small, but there’s a great sound… it’s just a really nice room. That would be my second choice.

I walk all the time. My absolute favourite walk is The Water Of Leith. When I read Ian Rankin’s AAA Edinburgh last week I thought, ‘you bastard!’ He got in before me. I would extend it a wee bit and say my favourite walk on the Water of Leith is from Roseburn to Stockbridge. It’s so beautiful and I like to Tweet, so I often take a picture of a Heron or something… it’s just a sensational place to walk. I love tweeting saying I’m just 500 yards from Princes Street and posting a picture.

Stockbridge probably. That’s partly to do with the food shops, and the quirky antique shops and second-hand shops. It’s village-like, and I like it for that.

Ironically, although I hated going there… I went to the Royal High School, and I think that building is stunning. When I’ve got visitors here for the first time and I’m showing them around, I love driving past that, looking at it, and saying ‘guess what that is? That’s my old school’. As far as modern buildings go, I love the Parliament. I know that’s not everyone’s cup of tea, but I love it. So old, The Royal High; new, the Scottish Parliament building.

Maybe the reintroduction of the trams. The great thing about Edinburgh is that is doesn’t change too much. We put in modern buildings, and they don’t always blend in, but the skyline stays the same. If I wanted to be humorous about it, the biggest change was the ENDING of the trams. I remember them vividly, and they went everywhere. So when they ended, it was traumatic in Edinburgh. The reintroduction of them is one of the most exciting changes, rather than the biggest change. It certainly is for me.

Probably The Fringe. I find it difficult to differentiate these days between them all – they all have their quirkiness. The Book Festival is fantastic as well. You can go to that and not go to anything else. The Fringe, on the other hand, you’ve got to wander around the city, and I love the quirkiness of it. I think The Fringe definitely, because all these odd spaces open up where you’ve never had theatre before – telephone boxes, big halls, wee halls, and on the streets.

I think probably my local hero is Gordon Aikman – he was a political assistant for the Labour Party leading up to the Referendum, during which time he got diagnosed with Motor-Neurone Disease. He was told he had a couple of years to live, so he immediately started a campaign. He’s very brave. He’s a young… beautiful young man. He’s become a real hero.  My fictitious hero is Inspector Rebus. When I tweeted that last week [after the publication of Ian Rankin’s Edinburgh, in which he picked Bruce as his local hero] I thought that was great, because Rebus is my local hero. I kind of mean that, too. Even as a fictional character, he’s done so much for Edinburgh – even though he’s a grumpy old man. And he’s a bad man… well, he’s not bad, but he bends the rules and what have you. I think it’s because of Ian’s descriptions of Edinburgh. He’s done his research – he’s almost obsessive with it – and it’s brilliant because he takes you down little closes you wouldn’t know… he reaches the parts that other people don’t. Places that are not in the tourist guides, so I love Rebus for that. He sells Edinburgh so well.