Like any young girl with dreams of becoming a pop star, Carrie Mac started off singing in her bedroom in front of the mirror “with the hairbrush and stuff”. She says she used to have two tape recorders set up in her room – “one playing the Spice Girls, the other to record me singing along to them singing”. As a teenager, she enrolled on a full-time music course at Jewel and Esk Valley College – and it was then she started writing her own songs.
By the time she was 20, the Edinburgh native was a familiar face on the local music scene – and her reputation was growing fast. In 2008, she won Forth One’s One To Watch Award, and soon she was supporting the likes of Tom Jones, the Proclaimers, McFly and The Saturdays, along with Alexandra Burke and JLS.
Most memorable Capital event?
For me, the most memorable Capital event was Hogmanay 2005.  I had left school and had started studying music and my friend bought me a ticket for the Concert in the Gardens, where KT Tunstall, Texas and El Presidente were performing.  It has always stuck in my mind, as I remember thinking “One day I would love to perform on stage like KT Tunstall”.  A few years later I did a gig with her and it was very surreal.
Who would you choose to headline Edinburgh’s Hogmanay?
If I am being completely honest I would choose myself… However, if I had to choose someone else, it would be Fleetwood Mac.  I absolutely love them and managed to get tickets to one of their gigs a few months ago and they were amazing!  To see my favourite band in my favourite city at New Year would be the best!

Favourite old-fashioned boozer?
I pretty much love all pubs that sell good beer, but I would say the Canny Man would be my favourite.  It’s full of character and is really close to my flat, which is pretty handy for a nice pint on occasions.
Favourite style bar?
I’m a massive fan of karaoke and most of my nights out always end up in a karaoke bar – so, I would definitely say that’s my favourite style bar.  The Electric Circus is an awesome bar, from the karaoke booths to its quirky design – and the fact that it does live music just makes it a great all round bar!
Favourite restaurant?
For years, my favourite restaurant was Pizza Express. I would go every birthday after going to the zoo – it’s almost a tradition!  I love Gusto on George Street. I have always had lovely food there.  I don’t eat out a lot so probably haven’t experienced as much as I should have, although I know that Edinburgh is full of beautiful places to eat.
Do you love or loathe the Festival?
A bit of both I would have to say.  I love the atmosphere and how the promoters transform the city and make it look wonderful.  It also presents opportunities to so many to share their talents.  I feel that because I am from Edinburgh, however, I do not take full advantage of the festival and sometimes when you are running to work it’s quite frustrating with how busy the place is.
Favourite Art Gallery?
The Dean Gallery is my favourite, purely for the fact that every time I pass it and I see the words “Everything Is Going To Be Alright”. It makes me smile!
Favourite cinema?
The Dominion cinema is awesome. With its sofas and chilled atmosphere it’s definitely my favourite place to watch a film in Edinburgh.  Its Art Deco design sets it apart from the rest. 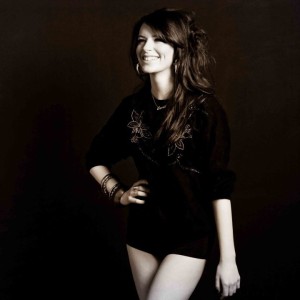 Favourite live music venue?
When I started out I had a list of all the music venues I would like to perform in and I have been fortunate to play in almost all of them.  My favourite would have to be Liquid Room, as it was always a dream to play there and that’s also where I won the Forth One To Watch Award, which opened a lot of doors for me. Plus, the sound is always great in there.  The Playhouse is also a pretty special venue.
Favourite walk in around or around the city?
I love walking to Cramond. It’s beautiful down by the sea and I love the nature and how there is a river leading to a waterfall down there.  I spent quite a bit of time down there when I was younger and love going now with friends – although we always end up at the pub!
Favourite shopping area?
Cockburn Street is great as it’s full of quirky shops and bits and bobs.  I love buying useless stuff for my flat, so it’s like my dream going there and buying yet another lava lamp.  I quite like second-hand shopping, too, so Stockbridge and Morningside are great for that, as they have so many.
Favourite piece of architecture?
There’s almost too much to chose from in Edinburgh.  I guess the biggest and best would be the Castle – there’s not many cities in the world that have a castle in the centre of town with beautiful gardens surrounding it. I also love the Scott Monument, as it’s so intricate and beautiful.
What’s the biggest change you’ve seen in the city?
I guess it would have to be the trams.  I think Edinburgh hasn’t changed that much if I’m honest – it has kept its beauty and history and when something is perfect the way it is there isn’t really a need for change.
Favourite festival?
It would have to be the Fringe.  It completely transforms the city into this amazing place every August, and there are so many things to do and see.  It makes me proud of my city.
Favourite Edinburgh band ever?
My dad’s band, Fireside Aliens. They are absolutely awesome and deserve more success than they have had.  It’s not me being biased, as their songs and live performance speaks for itself and over the years I’ve been heavily influenced by them.  They are, in my opinion, the best Edinburgh band.
Favourite local hero?
Jak Trueman is my local hero. I was extremely touched by his bravery, courage and empathy for others.  Even when going through something so tragic himself, he still thought of others and how he could help, and that is why he is my local hero.
Sell Edinburgh to a tourist in no more than ten words…
Edinburgh is the most beautiful city in the world.
For more about Carrie Mac, visit www.carriemacmusic.com
Share this article: