Fight Club author Chuck Palahniuk is to publish a collection of short stories in the form of a colouring-in book.

Out this October, Palahniuk’s Bait, subtitled Off-Colour stories for You to Colour, is both the cult writer’s first colouring book for adults, and his second short-story collection. 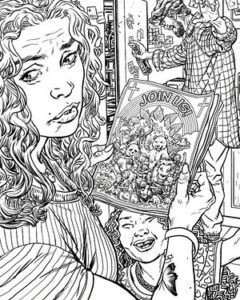 It is comprised of eight tales, which publisher Dark Horse has described as ‘provocative and not for the faint of heart’.

One of the stories is about a passenger on the Titanic “who finds a surgical solution to the obstacle of ‘women and children first’” and another is about a Hollywood star “whose fading brand faces a viral (and scatological) internet campaign”.

The book, which is released on October 25, is illustrated by comic-book artists including Lee Bermejo, Duncan Fegredo and Joëlle Jones.

“Maybe between your colours, the artists’ designs, and my stories we can create something that endures. Something worth keeping,” says 54-year-old Palahniuk. “Let’s create a well-bound book that can sit on any shelf and be available for a new generation to discover and enjoy.”

Later this month, the cult author, whose previous work has made people faint at public readings, will publish a comic-book sequel to his bestselling novel Fight Club later this month. Illustrated by Cameron Stewart, the comic will continue the adventures of Tyler Durden.

As reported on AAA Edinburgh last week, Palahnuik recently launched a  Kickstarter campaign to make a low-budget movie based on his 2002 novel Lullaby.

Washington-born Palahniuk says he will co-write the screenplay with director Andy Mingo. Josh Leake will produce.

“The support has been very gratifying,” he told Variety. “I’m planning to go to locations to watch it get shot but I really want it to be Andy’s movie, too. He’s the one who’s really making this happen.”