The Time Frequency, Judge Jules, Feeder, The Skids and plenty more stellar acts are set to play at this year’s Midstock Festival – and we’ve teamed up with the organisers to offer three lucky readers a pair of tickets each for the second day of the festival. 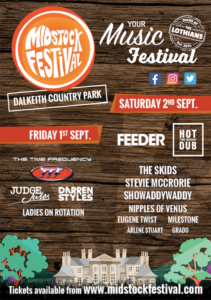 Topping the bill will be Feeder who will close the festival.

The organisers are also delighted to reveal that an extra night has been added, with Judge Jules and Darren Styles joining the legendary TTF, who are headlining the Friday night show.

Midstock Festival will take place on Friday 1 and Saturday 2 September 2017 and an eclectic mix of bands and artists will take to the stage over the two dates.

AAA has teamed up with the organisers of Midstock Festival to offer three lucky readers the chance to win a pair of tickets each for the second day of the festival on Saturday, 2 September.

For your chance to win, email us at [email protected] with the word MIDSTOCK in the subject line. Winners will be announced via AAA Edinburgh Twitter page (@aaa_edinburgh) on Wednesday 30 August at 12 noon. Usual AAA rules apply. Editor’s decision is final.

Tickets for Midstock Festival 2017 are still available from www.tickets-scotland.com, in person at Ticket Scotland Rose Street, Edinburgh or Dalkeith Library.