Bright Eyes mainman Conor Oberst has announced details of his new solo acoustic album, Ruminations, which is set to be released on October 14 via Nonesuch Records. 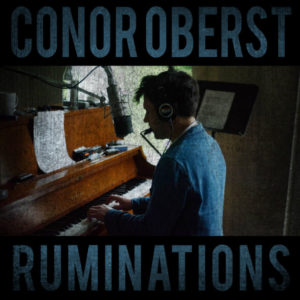 A press release states that Oberst returned to his hometown of Omaha, Nebraska after over a decade in New York City. It goes on to add that the songs hark back to his early career and “are almost sketch-like in their sparseness” with Oberst “alone with his guitar, piano, and harmonica”.

“Winter in Omaha can have a paralysing effect on a person but in this case it worked in my favour. I was just staying up late every night playing piano and watching the snow pile up outside the window. Next thing I knew I had burned through all the firewood in the garage and had more than enough songs for a record.

“I recorded them quick to get them down but then it just felt right to leave them alone,” added the prolific songwriter.

Oberst released Payola last summer with his punk band Desaparecidos. It was their first record in 13 years, the follow-up to 2002 debut ‘Read Music/Speak Spanish’.

Last month, Oberst recorded a cover of Bill Withers’ Lean On Me for the soundtrack of Amazon series Gortimer Gibbon’s Life On Normal Street.