Former X Factor and Dancing On Ice star Ray Quinn dropped into Edinburgh for a flying visit before he arrives next month to star in Tonight… From The West End.

The Liverpool-born actor/singer was in town on a secret mission… to get measured up for a new kilt.

Ray hopes to wow the audience at The Usher Hall in April by taking to the stage in traditional Highland dress. 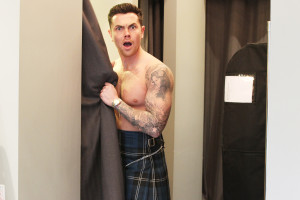 Fitness fan Ray will show off his impressive physique in a stunning Blue Ramsay tartan after being kitted out by Bowden’s Formal Menswear of Easter Road.

Tonight… From The West End will feature classic show-stoppers from Broadway and the West End, and is sure to have audiences on their feet.

Music lovers can expect a medley of hits from shows such as The Lion King, Saturday Night Fever, Fame, Wicked, Mamma Mia and Oliver.

Tickets are on sale now.