Everyone’s favourite lightsaber-wielding megalomaniac, Darth Vader, could be back on the big screen this December.

It is suspected the scoop may be revealed at the upcoming London Star Wars Celebration, but here at AAA we like to give you the heads-up.

With the Star Wars franchise being sold to Disney for a whopping $4 billion back in 2012, many fans were sceptical about what might follow. But that huge sum is looking like a wise investment the wake of JJ Abrams’ highly successful reboot of the franchise.

This brings us neatly to the hotly-anticipated Rogue One: A Star Wars Story, which is due for release in December 2016.

It follows another female lead called Jyn Erso (played by Felicity Jones), who leads a ragtag band of rebels to steal the plans for the original Death Star.

Due to the setting of the story, there have been rumblings that we may get to see our favourite Sith Lord – none other than Darth Vader himself, in the film. Although this is merely speculation, a few breadcrumbs have led many to believe this to be true.

In the official trailer for Rogue One, the first few chords of Lord Vader’s theme can be heard towards the end.

And now – thanks to the latest London Star Wars Celebration poster, some rudimentary photoshop skills and a dollop of wishful thinking – we can reveal the latest subliminal hint that the greatest screen baddie of them all will be back in all his glory.

An interesting story of intrigue and trickery, or just an unhealthy obsession with a movie franchise? You decide. 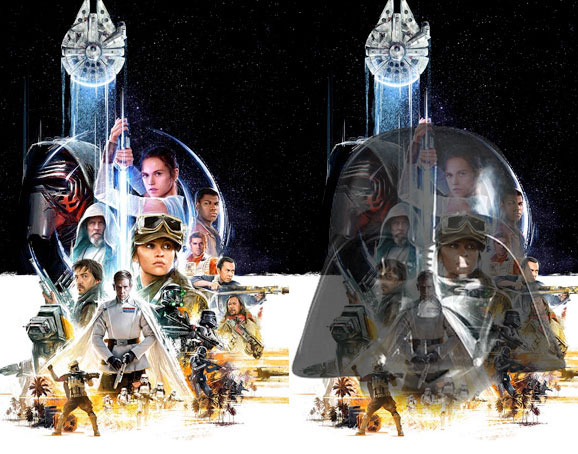