Scotland’s most successful playwright, Edinburgh’s David Greig has had his work performed in every major British theatre since starting his career in the early 1990s.

A highly regarded theatre director, too, his work has been produced Internationally, winning many awards along the way.

Now living in Fife with his wife and two children, Greig has gone on to become a chief political commentator where the arts is concerned.

His adaptation of The Lorax opens at The Old Vic in London this December.

Earlier this week, it was announced that Greig is to take the helm of Edinburgh’s Royal Lyceum Theatre next June in the wake of the its 50th anniversary celebrations.
Most memorable Capital event?

My teenage years were in Edinburgh. I used to go to gigs all the time and I’ve been a Fringe and festival junkie for over three decades, so it feels like there’s a lot to choose from. I could choose seeing The Proclaimers doing an early gig in Nicky Tams in 1985 or thereabouts. Or I could say watching David Bowie at Murrayfield Stadium… but in the end I’ll go for walking down the Royal Mile in the fog on Wednesday 18th September last year… all around me I could physically feel the excitement of the referendum and the feeling that Yes might win. Tourists were hanging out with Yessers with flags and banners. The fog gave a sense of connection to the past of the city. Outside St Giles I felt like the Edinburgh mob was looking on. Scary, exciting, profound… and also stupid. It felt a bit like it must feel on the edge of revolution.

Who would you choose to headline Edinburgh’s Hogmanay?

Edinburgh seems to have a plethora of such. My personal favourite would probably be The Jolly Judge.

I don’t have a favourite style bar because they’re not places I could ever imagine going. I like a drink upstairs in the Doric if I’m feeling like I want something a little more classy than a pub.

I have to be cheeky and go outside Edinburgh to The Wee Restaurant in North Queensferry. It’s my local, it’s astonishingly good food and has a great room in the shadow of the Rail Bridge. You can get there in 20 minutes by train from Waverley.

Do you love or loathe the Festival?

I love it. Passionately. It made me. It makes it possible for me to live and work in Edinburgh but remain connected to world and European art. But I am VERY glad it only lasts a month.

The National Portrait Gallery. I like looking at people.

The Filmhouse of course.

Oh… in the old days it would have been some grotty cellar where I could see The Vaselines. But now I think it’s the Usher Hall. I like sitting and listening to a concert.

Favourite walk in or around the city?

I’m a pretty keen hill runner. Edinburgh is blessed. I run up and around Arthur’s seat at lunchtimes. But my favourite route is the 7 Hills of Edinburgh Race which takes place every year in June. You start at Calton Hill, run up to the Castle, over to Corstorphine Hill, then to Craiglockart, Blackford and Braid before a race through Morningside to Arthur’s Seat and back to the start. It’s about 14 miles if you do it right. Beautiful views of the city.

The craft fair at St John’s Church during the festival. 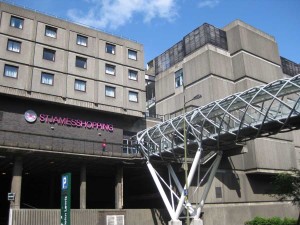 What’s the biggest change you’ve seen in the city?

It feels like it’s grown in confidence. Edinburgh is a European capital. It didn’t feel like that in 1985. It does now.

Got to be the Fringe.

Sell Edinburgh to a tourist in no more than ten words…

Stay away! After Edinburgh you’ll be spoiled for anywhere else.