A host of colourful Disney characters are set to descend upon Braehead Arena in Glasgow later this week when the latest Disney on Ice show skates into town.

The children’s show, entitled Passport to Adventure, will take little ones on an adventure to some of the most memorable destinations from Disney movies including Neverland, the African Pride Lands, Ariel’s mystical underwater kingdom and the wintery town of Arrendalle. 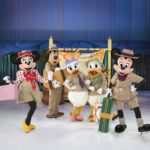 an Academy Award-winning score comprising countless Disney classics including Under the Sea from The Little Mermaid, I Just Can’t Wait To Be King from The Lion King, You Can Fly from Peter Pan and Let It Go from Frozen. A fun pre-show party will be hosted by characters from Zootropolis! as part of Disney on Ice’s Fit to Dance initiative, which aims to inspired families to have fun and be active through storytelling and dance.

Producer Kenneth Feld said: “It’s an extraordinary show and a family vacation all rolled into one incredible night. You really get a sense you are travelling right alongside Mickey Mouse, Minnie Mouse and their friends.”