If it ain’t broke, don’t fix it… just give it a tweak. It is a maxim that has served Camille O’Sullivan extremely well throughout her 12 years as a mainstay of the Edinburgh Fringe. And who can blame the half-French, half Irish chanteuse for refusing to change things up too much? After all, each show she plays is a sell-out, and rarely does she receive anything less than a four-star review for her efforts. 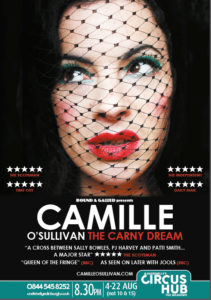 She’s the undisputed ‘Queen of the Fringe’, no question, and she’s earned that title – and a fair few awards – by more or less sticking to the same winning formula: delivering dramatic, spine-tingling renditions of narrative songs by her favourite composers. She’s not the only performer doing this sort of thing on the Fringe, but nobody does it better than her.

Camille is at her sensational best once again this year, wowing crowds at the Underbelly’s Circus Hub with her vaudevillian singing style and breathing wonderful new life into old classics by some of the masters of surreal storytelling – including Jacques Brel, Tom Waits and Nick Cave.

The chameleon-like singer effortlessly transforms herself into the weird and wonderful characters who people the dark songs she sings, and her vocal delivery is spot on as ever.

The Carny Dream, however, is more theatrical than Camille’s previous shows – the charismatic singer is assisted this year by a set that includes mirrorballs, glitter (lots of it), weird paper animal heads, a creepy gingerbread house and a trapeze, on which she dramatically swings across the audience as she sings.

As in previous years, Camille often gets up close and personal as she glides through the crowd in a figure-hugging outfit, and such moments have members of the opposite sex looking on rather nervously – fearful, you suspect, that it may be their laps the flirtatious performer perches herself upon.

Camille has the crowd in the palm of her hand from start to finish, and by the time she presents her “love letter to David Bowie” – in which she gives a stunning a capella rendition of Brel’s Amsterdam (famously covered by the late rock legend) and then thrills the crowd with further covers of Blackstar, Where Are We Now?, All The Young Dudes and Five Years – you just know a standing ovation is in the post.

That moment duly arrives after Camille closes with a spine-tingling cover of Prince’s classic Purple Rain.

Clearly, the Fringe loves Camille every bit as much as she loves the Fringe, and the rapturous applause as she takes her bows at the end is no less than she deserves. She’s a real one off, this girl. No doubting it.