Craig Hill is back for yet another year of Fringe fun. His shows have consistently sold out over the past 16 years so, before there’s no tickets left for this year’s run, AAA decided to sit down for a chat with Scotland’s finest kilted comedian…

You’re somewhat of a Fringe veteran now. How many years have you been performing at the festival?
Long enough to become a baldy – can you believe it’s my 17th year in a row this year?

What is it about the Fringe that keeps bringing you back?

My audiences – they’re fantastic! It would almost be a crime not to do it now. August is a magical time of year to be in Edinburgh, especially for a performer.

Can you remember your first Fringe show?

My first show was called Craig Hill’s Alive with the Sound of Music and it was full of Julie Andrews parodies and was on at The Gilded Balloon. It was the first time I started wearing a kilt. I still remember how exciting that first year was and, to be honest, it still is.

How old were you when you realised you wanted to be a comedian?

I was 28! I didn’t even realise – one of my friends kept on telling me I should be a comedian and she booked me a gig without telling me and the rest is history – I still owe her that pint! 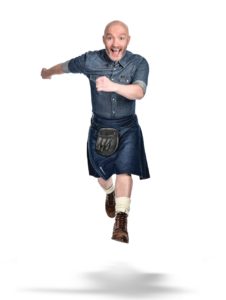 You’ve also toured the world extensively, performing everywhere from Indonesia to Australia. Where has been your most difficult show?

I am always amazed how much you can translate what you’re doing to audiences almost anywhere. I think funny is funny and people seem to still get it.

I remember being gobsmacked how much they laughed in Estonia!

Tell us a bit about Up and Coming…

It’s one up-tempo hour of me having a riot with an audience, playing with what I find and sharing my favourite funny stories from my year as well as songs and, of course, a wee bit of dancin’!

I was so chuffed with last night’s opening show – the audience were hyped before I even started. That’s a joy to go on to and that just continued for the hour – it was great fun!

How much work has gone into getting the show ready for the Fringe?

You spend a lot of time throughout the year just gathering ideas, but it’s most fun pre-fest when you start to write it all and put the show together – I love that process more than ever.

There’s thousands of Fringe shows on this year – why should Fringe-goers fork out to see yours?

I think you should go and see as many shows as possible. There are some fantastic shows on but if you like a bit of high-energy, light-hearted nonsense then do please pop in!