Anyone who grew up in the Nineties will remember rushing home from school to watch in awe as kids were given the opportunity to gunge their parents on CBBC’s Get Your Own Back.

Original host, Dave Benson Phillips, is bring a nostalgic live version of the show to the Fringe, during which teams of comedians are pitted against each other in a series of challenges. AAA caught up with the presenter to find out which contestants were the most fun and how you can be part of the show.

Where did the idea for Get Your Own Back come from?

As with all great show business ideas, it started in a pub! My agent at the time, myself and a lovely man called Peter Leslie, were looking to make a programme for children’s TV that featured me and my gunge.

How did you find contestants to appear on the show?

There were quite a few methods that we applied – we employed production people who would go out and find willing candidates for the show. We would also go to holiday camps and ask the holidaymakers if they would like to take part and do television campaigns.

Are you still looking for people to participate in the live version at the Fringe? 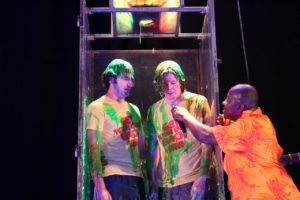 You performed Get Your Own Back: Live at the Fringe last year. Who were your most entertaining contestants?

To be honest, all of them were great! My favourite game to organise involved Stephen K Amos, Ed Byrne, Patrick Monaghan and Will Seward – now that was a game!

Why did you initially decide to become a children’s entertainer?

I’m not sure why – all I know is that, for some reason, I have always enjoyed performing to children. 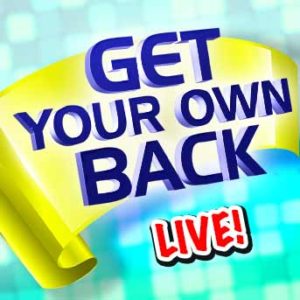 You’ve been working on building a travelling theatre, which you hope to complete by the end of July next year. How’s that coming along?

It’s coming along very slowly. I’ve had a couple of setbacks, but I’ll carry on!

What’s on your hit-list to see at the Fringe?

Preparing the show takes up a lot of my time… gunge is an all-consuming thing, so I don’t get a lot of time to watch anything.

Finally, why should people come and see your show?

Because my show has the three G’s… GROWNUPS, GAMES and GUNGE!