He may have fronted one of the world’s most influential punk bands, but Henry Rollins still has a lot to get off his chest.

The former Black Flag frontman, who now channels his angst into spoken-word performances, is returning to the Fringe with his Charmingly Obstinate tour. AAA caught up with him to find out more about his show and whether he sees himself ever making a return to music.

You’ve performed at the Edinburgh Fringe Festival multiple times before. What is it that keeps drawing you back?

A lot of things. I like the atmosphere at the Fringe. I like seeing all the people walking the streets. It’s a great city anyway but, in August, it’s cooling off and reminds me of the east coast in America in late September/October.

One of the things I like to do is walk around post-show and take in the air. I will often stay out for hours just walking around. I also like being in one venue for more than one night and the Fringe is one of the only times I get to do that. If I had my way, I would be there every year.

Do you feel that the spoken word format now offers you a better opportunity to voice your opinions on what’s going on in the world than music?

For me, at this point in my life, the talking shows are the perfect medium. I travel all over the world and the talking shows allow me to report to an audience in an almost journalist’s posture. I wouldn’t be able to do this with lyrics, really. Things change quickly and it’s great to be able to address things as they break. 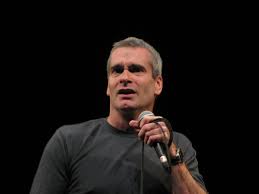 Do you ever see yourself returning to music?

No. I did it until there was nothing left. Music was never about making music for me – it was something that was in me and had to come out. I was only interested in the anger and fury I could unleash, how hard I could push myself physically during performance.

I never enjoyed it. I never liked being in a band, being around other people day after day. That’s how I know it was real.

Your shows come across as very natural and conversational, but how much work actually goes into preparing for them?

It is all extremely planned. It’s not like I am pulling a string out of my chest and the words come out the same way, but I know exactly where I am going onstage.

For me, it’s all about preparation – a lot of it. I am not interested in just going onstage and rambling, looking for material in real time. I work on the ideas in my own time, refine them and present the evolved, completed idea to an audience and don’t put them through me trying to find it on their time.

I am sure that a lot of performer types can go out there and wing it but I can’t. Preparation, due diligence – that’s what works for me.

You seem to be constantly touring. Would you describe yourself as a workaholic?

I would. I am unable to be off the road and wake up at my house every day without feeling that I am taking the easy way out. It feels like a trap that I have willingly put myself in. If I am working on a film or a television show and I am out of the house by 0600 hrs, that’s fine, but if I am just at the office working on stuff, it becomes difficult after a few days.

I like tasks, obligations – things I have to show up for and complete. I need the pressure of performance, the expectation and the idea, however illusory, that someone somewhere hopes for my failure.

Like your last question in this interview, that’s all the inspiration I need. Jet-lag falls away and I can’t wait to engage. I don’t do things for money. I do them to take them on and complete them. I’m not an artist. I am an adventurist, a confrontationalist.

The last time I came to one of your shows, there was a huge variety of different age groups in the audience. Does it still surprise you to see so many young, new fans turning up?

Yes. If I am to believe the letters I get, young people watch me on the internet, become interested and show up. Older folks tell me that they bring their kids, having seen me before. Professors bring their students and vice versa. In my line of work, it’s amazing that anyone gives a damn about anything I do after 35 years of being onstage.

Can you remember your first spoken word show? What was that like?

Yes. It was a show in 1983 where a lot of people all got ten minutes each. It was an almost weekly thing that this one promoter was doing and I was asked to be on the bill. Ten minutes, ten dollars. I could eat for a few days with that, so I said yes. I read a thing I had written, told a brief story about our guitar player almost getting run over by a white supremacist outside of band practice. I remember the audience yelling for me to tell another one. I told them my time was up. People came up to me afterwards, asking when my next talking show was…I have been doing this kind of show ever since.

Do you have any memories of performing in Edinburgh?

Sure. None of them are all that interesting. Like I said, I am happy to be in Edinburgh and enjoy my time there. I like the post-show walk around, seeing people together, hearing them laugh and talk. The people who come to see me are great and it’s one of those parts of the tour I always look forward to. I can’t remember anything bad happening to me there.