For two years now, one of Edinburgh’s finest vintage singers has been helping Fringe-goers get their day off to a get great start with morning performances of Sarah Laing Sings the Music of Doris Day at The Free Sisters.

AAA sat down for a chat with the local singer to find out where her interest in Doris Day came from, how she’s been preparing for the Fringe and how it feels to be performing at the festival she grew up attending.

This is your second year performing at the Fringe. What was it that made you decide to come back?

The show was very well received by audiences last year and it seems that Doris Day is very popular with a wide variety of people.  Last year, in the same audience, there was a 3-month-old baby and a 90-year-old lady. Living in Edinburgh, I’ve grown up with the Fringe and was always desperate to be a part of it all.  I had such a good experience making my debut last year and I was so excited to come back again. 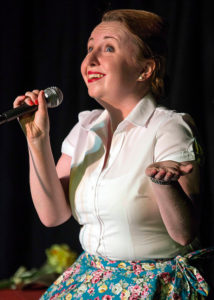 Tell us about Sarah Laing Sings the Music of Doris Day…

The show is a 50-minute journey through the life and career of 50s and 60s icon, Doris Day.  Featuring some of her most loved songs including Secret Love and Que Sera Sera, it’s suitable for all the family. The audience can even join in with the singing if they like!

She’s been my favourite performer since I was little and I felt that she needed a show dedicated to her music.  I think that she sometimes get lost amongst some of the other actresses of her time. Generally, people only think of a certain style of film when they think of her but she was such a versatile singer and actress.

Is this year’s show any different to the one you did last year?

I’m doing some different songs this year – Doris has recorded over 20 albums so there’s no shortage of tracks for me to choose from.

Since performing at the Fringe last year, I’ve been lucky enough to perform the show in various venues such as the Bridge House Theatre in Penge, London. That experience has allowed me to try out a variety of different songs and see which ones work. Don’t worry, though – all the old favourites are still there!

How have you been preparing for the show?

I’ve been having lots of early nights and steam inhalations.  It sounds boring but I learnt from last year that the Fringe is a marathon and you need to pace yourself, especially when performing early in the morning. I’ve also been watching lots of Doris Days films for research, which really doesn’t feel like work!

As a local performer, can you remember the first Fringe show you ever went to?

I remember seeing all the street performers and loving the atmosphere on the Royal Mile when I was really little. It all felt so exciting.

I can’t remember the very first show I went to but, in my teens, I loved seeing a lot of musicals such as I Love You, Only the Brave and You’re Perfect, Now Change. 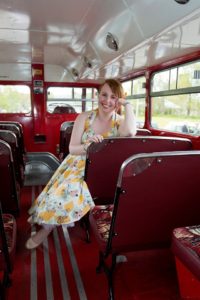 What’s the best thing about performing your own Fringe show?

I love getting to talk to the audience after each show and hearing what they thought of it.  Performing my own show also gives me the freedom to change elements if I think certain parts are working better than others. My Dad is doing my tech for my this year, though, so I just need to remember and pre-warn him if I do plan to change anything!

Are there any other shows you’re particularly looking forward to seeing?

There’s so many I want to see and I still haven’t got through the whole programme! I’m particularly looking forward to seeing Roulston & Young: Songs for Lovers (and Other Idiots), Camille O’Sullivan: The Carny Dream and Christina Bianco.