Gavin Blackie, winner of Edinburgh’s Got Talent back in 2010, has announced the release of his debut album, Laid Bare, which is due to drop on Friday, 6 November.

On the same day the album is released, Blackie will perform at Edinburgh’s Church Hill Theatre, Morningside to celebrate the journey he’s been on since winning the local talent contest five years ago at the Assembly Rooms.

Rather than try the quick route to stardom by entering nationwide, televised competitions, Blackie, who has toured with Britain’s Got Talent winner Jai McDowell, has strived to create an image and album that has been five years in the making.

Blackie himself, based on his life experiences, has penned every track on the album, which was recorded at Offbeat Studios on Edinburgh’s Royal Mile and produced by Iain McKinna. 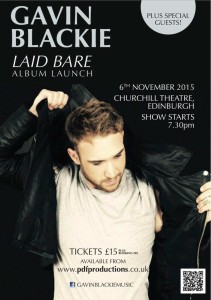 “I’m so grateful and happy to be able to present my new album to the world after five years of researching the right material, getting the right producers and finally having the confidence to bare my soul to the public through the album,” said Blackie.

“I have gathered up a consistent fan base over the years, but I want to reach out to a wider audience.

“Singing is in my blood and I can’t see me stopping now that I’ve come this far,” he added.

McKinna, who started his recording career at Edinburgh’s Southside Studios in 1976 working with punk and new wave bands The Scars, TV21, The Valves and Freeze, said, “[Blackie] initially approached me after winning Edinburgh’s Got Talent back in 2010. In the competition he was singing covers of course, but following his win he strongly felt he needed to establish himself with his own original material.

“It’s been great fun writing together and Gavin has a superb voice,” he added. “This collection of songs is the start of a writing formula we hope to expand upon in future.”

Laid Bare is available to download from all major online retailers from Friday, 6 November.