Nobby Clark was the original frontman of Seventies sensations Bay City Rollers. The Edinburgh-born singer sang on all the band’s early hits, including Keep On Dancing, We Can Make Music, Manana, Remember, and the US No.1 Saturday Night.

Nobby left the Rollers in 1974 – just before Rollermania really took off – and has since released three solo albums, as well as writing and producing for other artists.

You can read more about Nobby’s incredible story in his autobiography, The Lost Roller: The Autobiography of Nobby Clark, which is available from Amazon. 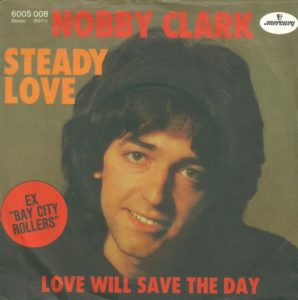 On Saturday, 15 April, Nobby can be seen in live action at Edinburgh’s Church Hill Theatre alongside his old pal Rab Howat, with whom he’s recorded a brand new album titled Shoulder The Sky.

The Edinburgh gig marks the first performance of the album in full – and tickets, priced £16.50, are available from the Usher Hall box office. To get yours, click HERE.

A well known guitar player from Glasgow, Rab is credited for playing guitar on albums by The Incredible String Band, Runrig and RAF, as well as on his own albums in collaboration with Kenny Herbert.

He also played guitar on Frankie Millar’s hit version of Caledonia. He now performs regularly in Edinburgh with the Rab Howat band.

Nobby and Rab became friends many years ago and Rab has played guitar on all Nobby’s live performances.

They have recorded together in many studios over the years – including the legendary Abbey Road – and decided it was time to write some songs together purely for the fun of it. But the result surprised even them, and culminated in the new album Shoulder The Sky.

Ahead of his visit to the Church Hill Theatre, we caught up with Nobby for a chat…

Pink Floyd at the Usher Hall, in 1974, performing Dark Side Of The Moon.

I don’t drink now, but when I did partake in a swally, I frequented The Roseburn Bar. 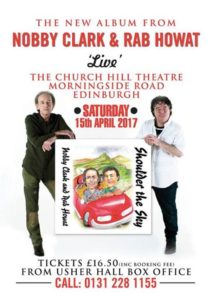 I recently discovered a Thai restaurant in Johnston Terrace called The Orchid. Excellent.

I love it. I’ll often be seen in the High Street or down the Grassmarket during the Festival. I enjoy watching the street performers. Can’t get enough of it.

The National Gallery at the Mound. I literally bumped into Jools Holland there in the Festival last year.

I have fond memories of being terrified as a teenager at the Pooles Synod Hall in Castle Terrace. They showed all the Vincent Price movies – The Mask of the Red Death, Pit and the Pendulum, The Curse of the Mummy’s Tomb, etc… It was demolished in 1965. Nowadays, I’d recommend the Omni Centre at the top of Leith Walk. Easy access to restaurants and bars.

Has to be Bannerman’s in the Cowgate. Saturday afternoon with The Rab Howat Band.

Arthur’s Seatt and the Craggs. I go there often for some tranquility and never take it for granted.

The Scott Monument. I don’t like to see it surrounded by modern fun rides during the Festival. It diminishes its stature and importance, in my opinion. 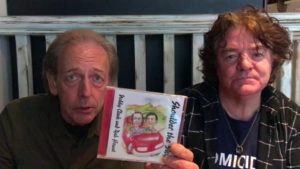 The trams. Good for getting to and from the airport.

I don’t have one. The Edinburgh Festival gets better every year.

Andrew Ewing. 1869-1965. Entrepreneur who created and developed the Buttercup Dairy Farm at Clermiston Mains and 250 outlet shops. Became a very wealthy man but died penniless having given away his fortune to help others.

The Boston Dexters with Tam White and Toto Mcnaughton.

Visit historic Edinburgh. You will not want to leave.