You may not know the name, but there’s a fair chance you’ve heard Jeff Wootton’s work. The Mancunian guitarist has collaborated with Brian Eno, Massive Attack, Noel Gallagher and Damo Suzuki from Can – but perhaps most famously, he’s been lauded for his work alongside Damon Albarn, contributing to Gorillaz and Africa Express.

Late last month, the 28-year-old took his first step into releasing solo albums with The Way The Light – an excellent debut album that should put him on the map in his own right.

As well as standard digital download, the album is available as a limited edition 12” vinyl LP, including a 28-page booklet featuring 10 original artworks by legendary artist Damien Hirst. Each new Hirst artwork is inspired by and named after a track on the album.

Recently, Wootton went down an absolute storm supporting Blur on tour – and gig-goers in Edinburgh can find out what all the fuss was as he opens for Alex Turner’s The Last Shadow Puppets at the Usher Hall tonight (March 26).

The Way The Light is your first solo album. Did you always plan to put out a solo record?

The whole process from writing to recording took around two years. We recorded two weeks at a time in a house in Manchester and LA. It was always my intention to put my own record out. Although I’ve loved being in the bands I’ve been in and working with the artists I’ve collaborated with, it felt right to be put a record out now. 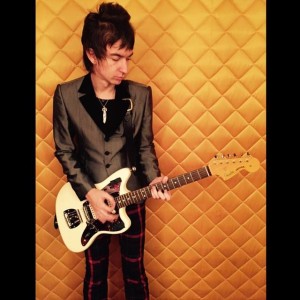 You’ve said that you wanted to take guitar music somewhere else. Do you feel like you’ve achieved that with this album?

Yeah, that was my intention with this album. I felt like I have pushed the envelope as far as sonics are concerned. I’ve dedicated a lifetime to that guitar-wise – rock ‘n’ roll needs to move forward.

Tell us a little about how the record was recorded. It wasn’t done the conventional way in a studio, right?

No, we did it in a house where we would set up the studio gear in a room and the engineer (Mark Howard) would be in the same room also with the mixing desk. Working like that is great  for vibes – sometimes you can lose some ‘voodoo’ if you walk out of a control room into a live room to record. Also, recording in houses you can get very unique sounds. The Motown studio in Detroit was just a house.

How excited are you having now taken the next step and put the album out?

Yeah very – I just want to keep making music and getting it out to people in any way I can.

You are well known for your work with Damon Albarn. Did he have any input into your solo album?

I made a conscious decision not to involve any names I’ve worked with before, purely because I wanted to get my first one out off my own back.

What does Damon think of the record?

Well, our first gigs were supporting Blur – so that’s always a good sign.

Damien Hirst created 10 original artworks for The Way The Light. Did you know Damien beforehand?

I did, yeah. We were fans of each others work and he offered to collaborate when he found out I was making a record.

Each artwork is inspired by and named after a track on the album. Was it just a case of sending him the music and letting him do his thing?

He created the artwork in his studio and then I picked out the ones that identified with the track the most. Usually, it would be something lyrically that connected with the colours or feel of the art. 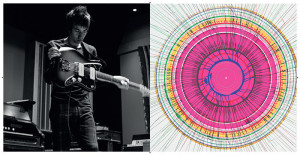 Did what Damien came up with surprise you in any way?

He is the Warhol of our time. I think what he created is beautiful.

Are you nervous about suddenly becoming the main focal point when you go out and play live?

It took some adjusting at first for sure, but I’ve been lucky to play alongside some amazing frontmen and from that you pick up certain things. Damon is always great with an audience.

You road-tested material for the album on tour with Blur. How did it go down with Blur fans?

They were great. I think through Gorillaz and Damon’s solo record they were appreciative of hearing my music – and I’m thankful for that.

Do you worry about winning over gig-goers who are essentially there to see someone else?

I see it as a great thing. I mean, not everybody is gonna dig you, but it’s great to play in front of a varied record-buying audience.

You’re opening for The Last Shadow Puppets in Edinburgh on Saturday (March 26). Will it be the first time you’ve played live here?

We played here supporting Kasabian at the end of last year. Scotland is always a great place to play – they’re always up for it.

What can those heading along on Saturday expect from your set?

What plans do you have the rest of 2016? Any festival slots?

Well, I want to make another record quite quickly. There’s talk of some festivals… see what happens.