Ahead of his much-anticipated appearance at one of electronic dance music’s most popular clubbing brands, AAA had the privilege of chatting with  Greek-Swedish superstar Angello.

Check out our exclusive interview with the man himself, and then enter our competition to win a pair of fast-track tickets to Saturday’s monster event.

It’s been great! The album really resonated with the people so I couldn’t be happier!

Very much so! Nothing beats a good Scottish crowd!

We’ll see, obviously a lot of album edits and unreleased music from my Label Imprint SIZE. Visually the show is stunning, a little dramatic light wise and a super dynamic show!

Really beautiful and fun city! Most of the time I come in and do the show and don’t get too much time in the city or on the country side, but some day I’ll have more time.

Yes every show has changes and obviously played differently so each show is unique to me , which is really important to stay inspired!

I could never ever tell those stories. I feel like there’s some sort of confidentiality at shows. People go out to have a great time and what they do shouldn’t be judged – although I’ve seen some pretty crazy stuff that I only talk about with my closest circle!

Dance will be like any genre, most of the pop radio stations are picking up loads of music for their shows now. The mainstream will always be entry level and one people want to explore more they dig a little deeper. Personally, I think the underground scene is turning a little mainstream at the moment – so we’ll see what happens in the near future.

No personality shown by artists – most of them follow the most successful in their subgenre and that created similarity, which is a bit annoying.

I don’t try to make hit records. I only do what I like and what I’m proud of and it makes me extremely happy when things gets picked by the people and appreciated.

It all depends – it can be a fashion magazine, architectural masterpiece or just something random I feel fits the track. When you work with a lot of vocals like I did on this last album it’s much easier to pick something out of the lyrics.

Yes and no. I need shit weather to stay inspired and focused, so I’ve been spending a lot of more time in Sweden the past year. The sun helps my mood and it gives me a freedom feeling – but at the same time, nothing beats a bit of melancholy!

That’s an incredible feeling – if I can change one person’s life for the better, I’ve succeeded in life.

“I don’t try to make

hit records. I only do

I love the album as a whole. No track would be the same without the other. It took about three years from start to finish, and every track on there helped inspire the next.

That’s a hard one! I had about 60 songs to pick from and I put them in order, changed the order, removed the disruptive ones to the others. It was hard, but I have loads of music in my vault now.

I think it’s more important for me than the industry. I need to go record shopping and dig a little to discover new music and new artists. It’s really important to get back to that same discovery as when I was a kid.

Stuart Price. He mentored me through the whole album and he’s become a very good friend of mine. He’s been there for me emotionally since the start of the album.

Ha ha ha, yeah, pretty much! For me, it’s what a DJ does if they play five-seven hours that extinguishes the good from the bad.

I haven’t read, seen or heard anything about myself, interviews, or any media in about seven years. I know… 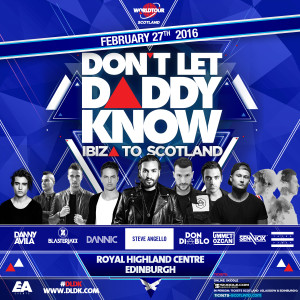 AAA has teamed up with Don’t Let Daddy Know to give away a pair of fast-track tickets to Saturday’s event at The Royal Highland Centre, Ingliston. For a chance of winning, simply fire off an email to [email protected] with the word DADDY in the subject line. We’ll need your full name, age, and address in the body of the email. The winner will be notified by 4pm on Friday, 26 February at 4pm. Usual AAA rules apply. Editor’s decision is final.

Tickets are on sale via www.dldk.com

Bring your flag and represent your country #DLDKSCOTLAND

Just in case you need a reminder of what to expect, check out this video from DLDK Amsterdam 2015:
https://www.youtube.com/watch?v=qgXSyZDobxQ

Ticket Info:
We advise only buy tickets from www.dldk.com
All unofficial sources could be selling fake tickets & will not guarantee you entry. if you already did we can’t guarantee this is a real ticket. Since every sold (e)-ticket needs to be scanned at the entrance, bring a printed version of it with you. Access will be only granted with a valid, printed E-ticket. Confirmation mails or anything else do not function as an entrance ticket.