Are you looking for salvation? Is your soul in need of saving? In that case, you might want to take a trip down to the Leith Shore.

The latest addition to the Shore’s eclectic selection of restaurants and bars, The Salvation Of Leith has taken over the building which formerly housed the Leith Beer Company, and previous to that, the much-loved Leith Oyster Bar. Yes, folks, those large, light-attracting glass doors are open again and ready for your patronage. 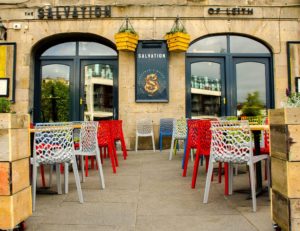 For many months, though, 58 Shore lay dormant, passers-by curious as to what would emerge from its cocoon. Summer time was fast approaching, the venue’s popular sun-kissed terrace looking desolate and lonely. Rumours abounded. A super-pub? A pet shop? A boutique clothing store?

Well, the premises had been a school for destitute children, a soup kitchen, and a clothing exchange in a former life after all. It had been a boarding house, too, an Association For The Improvement Of The Condition Of The Poor (1872-1943), and a House Of Call where Shore dockers and labourers were paid their wages away from the allure of alcohol and other temptations. Even David Bowie stopped off there for a pint and something to eat back in the 1990s.

Reassuringly, it’s reopened as a great place to eat, drink, and hang out. Indeed, out of all the eateries along the Shore, The Salvation is, arguably, the best value for money. It gets the best of the sunshine out with Malmaison (50 outdoor seats means it has the most space, too), attracts a broad audience (clearly a safe, comfortable place for women to enjoy a pint by themselves), and is colourfully attractive without being too showy. 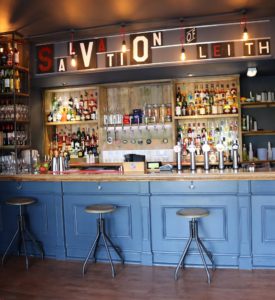 Despite being a relatively small space inside, however, there’s an airy feel to it. The walls reveal exposed bricks, the nautical-inspired lighting salvaged from the shipyards, and the red velvet cinema seating comes courtesy of an old Leith auction house. Colour-wise, hues of blues are prevalent throughout – another nod to the Water Of Leith.

So what’s the grub like, then, you ask? Well, for Starters (works on two levels, see?), there’s a cross section of seafood and Mexican-themed scran: lobster cakes, squid, spicy chicken wings and tacos to name but a few. The tomato soup, meanwhile, almost demands a second helping. It comes in a decent-sized portion, but see if you don’t want to go back to the Chef saying, “Please, sir, can I have some more?” It’s that tasty.

Burgers, however, dominate the main menu – quirky-titled slabs of meat that come topped with everything from Portobello mushroom and char-grilled pineapple, to Crabbies pulled-pork and bacon. The equally quirky-titled Not A Burger selection also comes in a bun; however, combinations of chili con carne, filleted chicken and the like ensure you still have to open wide to cram it all in. Some dishes arrive in baking trays, portions are plentiful, and there’s no reason why two people – hungry, but not keen on a three-course meal – can’t share, either. If you are feeling greedy, though, you can also chow down on some steak sandwiches, smoked ribs or sizzling fajitas. The sides, meanwhile, offer up some taste-bud-popping paprika chips, and the desserts are all based on a cheesecake theme. In short, you’re bound to find something you like.

The staff on the other hand – speedy, attentive and always happy to have a blether with customers – have the words “Salvation comes in liquid form” strewn across the back of their T-shirts. And they’d be right. There’s a nice mix of traditional lagers and craft beers here, the only downside figuring out which drink to choose. Indeed, one of the first things you see on entering is a bright, colourful fridge full of attractive beers. Expect to be dazzled.

With the venue cut into two sections (an upstairs and downstairs), the water-side part lends itself more to casual drinkers and on-the-go diners looking to enjoy the sun. Upstairs, however, the space is more suited to larger parties of pals looking to stay a good couple hours.

Either way, the mood is easy-going and stress-free. You might occasionally bump into a jazz duo in the front room, and there’s talk the venue’s much-loved quiz is about to return, too.

Whether The Salvation’s success depends on the good weather, though, remains to be seen. Competition is fierce along this stretch of water – The Baker’s Arms recently opened a couple doors up – and casual visitors to the area won’t make their choices out of any loyalty.

That said, The Salvation is an excellent ‘all-rounder’ that will appeal to many, and cater to those even on the most modest budget. Those seats and tables on the outdoor terrace fill up quickly, though, so make a bee-line for the Shore soon as the sun pops up. Salvation awaits…