In Diary Of A Shanghai Showgirl, Virginia native Miss Amelia Kallman and Bristolian Norman Gosney expose the astonishing story behind their pleasure palace, Chinatown, where they introduced nightly, new-vaudeville, risqué performances to the Chinese. AAA caught up with Amelia earlier this week for a chat.

We got here the 17th and have only just finished our third show, but so far I’m loving it. It’s amazing to have such a diverse group of talented, creative people from around the world in one place showcasing their work. It’s a really inspiring, positive energy here. It’s my first time in Scotland, too, so soaking up the gorgeous landscape. 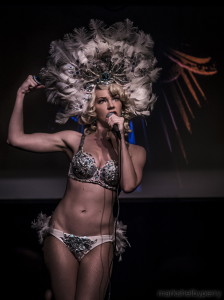 Diary Of A Shanghai Showgirl is a two-person variety show that tells the real-life story of the couple who took on the Communists and beat the odds to open China’s first burlesque and cabaret nightclub. It’s an adventure, a love story, and a cautionary tale…

In 2007, I and Norman Gosney moved to Shanghai with the dream of opening China’s first burlesque nightclub. In 2009, we opened our pleasure palace, Gosney & Kallman’s Chinatown, in a former Buddhist temple, where we introduced nightly, new-vaudeville performances to the Asian market. Chinatown quickly became a decadent oasis of fantasy and escapism, and one of the hottest nightspots Shanghai has ever seen. But with fame and success came problems for us foreigners – from local jealousy to government spies, escalating to a night spent in jail, bank accounts frozen, and being forced to escape overnight or else face a long, unwarranted stretch in Chinese prison.

We have never spoken publicly about our story… until now. The Times says, ‘Edinburgh audiences have a choice: You can see it for free now in a pub, or wait a couple years for the movie,” so we hope people choose to come see it for free now. 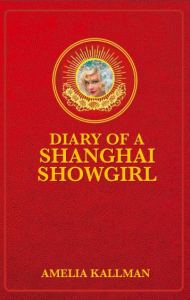 After getting thrown out of China and landing in London, I didn’t have a visa to work, so while I applied and waited, I decided to write down my story. The book, Diary Of A Shanghai Showgirl: Raising The Red Curtain On China… Uncensored goes into the details that we couldn’t possibly cover in an hour-long show – everything from the backstage dramas and how one actually does burlesque in a country where it is technically illegal, to dealing with the authorities, and what it is really like to live, love, and do business in China, set against the backdrop of forbidden cabaret and nightlife at its naughtiest.

The book came out the beginning of July in the US, then the UK, and is now available through Amazon around the world. I’m super chuffed to say that it’s getting a really positive response, with people saying they are gripped and can’t put it down. It’s been a long time coming, so I’m really enjoying finally having it out there, and of course, being in a place where I have the freedom to tell my story.

So far, so good. We’ve been lucky to enjoy great crowds and audiences from starting our run, so hopefully that will continue. The venue’s projector died before our second performance, and we show a lot of slides and film footage from the club, but the show must go on, and the audience still seemed to enjoy it. There are always going to be people who don’t care for it or expected something else, and that’s totally cool – you can never please everyone, but after every show we always get at least a couple of people who come up to us and thank us and tell us that they genuinely enjoyed it and ask questions and buy the book – and that is awesome and tells me we’re doing something right.

We have a great story. It’s unique, it’s real, astonishing in parts… ‘Come see the acts that got us kicked out of China’, we say. The show includes some song and dance, a 3 Minute Movie, burlesque, film, and an escalating narrative… It’s a story unlike any other at the festival. See it here first… and it’s free.

For the most part we do I think, unless we miss them. It’s been a bit full-on this last week or so – we had a great article on the BBC website, which got a lot of attention, and some other fabulous articles, too. Over the years, though, owning nightclubs, speakeasies, and performing, I’ve learned that everyone has an opinion, good or bad, so you take things with a grain of salt. I know who I am, and I’m always trying to do better for myself, and as long as I know I’m doing my best, I think that’s the most important thing. 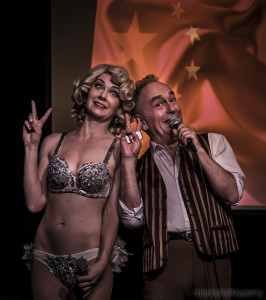 Anil Desai’s Impressions of a Hindude at Sin is hilarious. Welcome to Clown Town in the Yurt at 2pm at The Free Sisters was really great. A brilliant street performer, Johnny Macaulay, and looking forward to seeing The Rat-Pack Stand-up Comedy show tomorrow at The Free Sisters too.

I want to check out Jo Burke’s iScream, Jenny Say Qua, Javier Jarquin: Card Ninja, Gary Busey’s One-Man Hamlet… There are so many.

Eat.  Looking forward to seeing the castle and doing some tourist things. I really want to see the underground city.

A genuine religious fanatic carrying a cross who we thought was a performer… whoops!
Diary Of A Shanghai Showgirl, The Gothic Room @ The Free Sisters, until August 30, 12 noon, free, 0131-622 6801, www.edfringe.com