Little Thing, Big Thing is a darkly comic thriller from Fishamble by Donal O’Kelly, both double Fringe First winners. In it, an ex-con and nun are chased across Ireland for a roll of film… why the bleedin’ fuss? Sorcha Fox and Donal O’Kelly play Martha and Larry, who take a high octane jump into the world of international energy skullduggery, awakening passions they thought were dead.
AAA caught up with O’Kelly for a chat earlier this week.

Little Thing, Big Thing is a two-hander play I wrote and I also perform in it. It’s about a 1990s film roll from Nigeria that a returned missionary nun brings to Ireland, and involves her and an ex-con in an unlikely alliance as they are hunted across Ireland and through the world of corporate oil-gas skullduggery.
The audience reaction has been great, apart from one woman who told me it was an hour of her life she couldn’t get back. I love the Fringe.
Yes, once. It’s a big reason for coming to the Edinburgh Fringe.
It expresses truth where truth is suppressed, in a gripping way with lots of laughs. Stuff people need to know about, but without being lecturey. 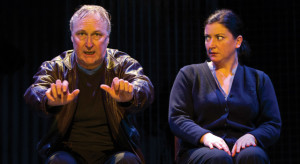 Pat Kinevane’s Underneath at Dance Base, Sonya Kelly’s How To Keep An Alien in Traverse, and of course my daughter Katie O’Kelly’s Counter Culture in St. John’s Church Princes Street as part of the Just Festival.
The Palestinian Circus in The Meadows, but cancelled today because of an injury (hard luck and swift recovery hoped for); Robert Lepage’s 887.
See a couple of shows, chill out, have a beer outdoors, go blank for a bit, listen to the woodpigeons, bliss.

The Mosque Kitchen has saved my life so many times it automatically tops the list. Joseph Pearce’s on Leith Walk is cool.

The Palestinian stand-up comic Ayman Nahas at Forest Fringe did a hilarious ventriloquist act with his dummy – his shrink. Really unexpected and brilliant.