Whether it was through screaming at monkeys in Jumanji, setting his blouse alight in Mrs Doubtfire or by fearlessly using stand-up to highlight the political issues that he held close to his heart, Robin Williams managed to entertain us all with his unfailing ability to draw laughter from virtually any situation. But for Fringe comedian Jamie Kilstein, who counted Williams as both a personal friend and a mentor, the profound impact he had on his life was no laughing matter…

“I was first introduced to Robin backstage at one of my shows by (fellow comedian) Rick Overton,” explained Jamie. “I was really nervous about meeting him because he was one of the first things I associated laughter and comedy with, yet I instantly felt comfortable around him as he was quiet, funny and sweet. It was one of the best days of my life and I’ll always remember that his was the only laugh I heard that night – it was booming.”

Jamie, a high-school dropout from New Jersey who had been living out of his car for two years whilst struggling to ‘make it’ as a comedian, couldn’t believe his luck when the actor became a huge supporter of his podcast, Citizen Radio (co-hosted by his wife, Allison Kilkenny). The 33-year-old doesn’t just like to make people laugh, he also likes to make them think and so the show takes on the controversial news stories that are often ignored by the mainstream media.

“My favourite type of comedy, music and art is the kind that goes after powerful people,” said Jamie. “You have these guys who market their shows as being ‘edgy and dangerous’ but when you go they are standing there telling rape jokes. What’s edgy about being sexist?! That shit is everywhere and it’s boring.

“I was pretty apathetic as a teen – I knew shit was fucked up and that good people were getting screwed by the government or religion or whatever, but I didn’t care enough to read up on it. Then I started listening to George Carlin and Bill Hicks and realised I could talk about it on stage. Then I realised that if I did, I should probably be smart – so I stopped going to bars to drink myself to death and yell about politics and started reading books instead.”

When the couple left the radio station they were working with and lost their source of income, Williams began funding their show and put his friend in touch with his managers and agents.

“He encouraged us when all odds were against us and we were speaking out on issues on war, same-sex marriage and feminism. He said to keep raising hell,” reveals Jamie, “He told me that he liked how we kept kicking people in the balls – he was a radical guy who appreciated boundary-pushing.

“The coolest thing about the podcast is that it’s the one thing that we did for love not money and yet, without it, we’d still be struggling. Sometimes when you make something for the right reasons and not because it’s what everyone else is doing, it can be the thing that carries you the farthest.” 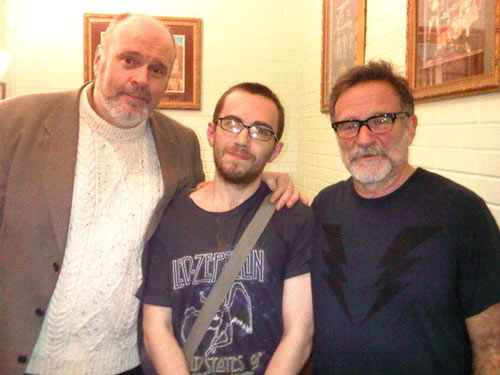 him as he was quiet,

The show has since featured everyone from Sarah Silverman to Billy Connolly and Jamie has appeared on some of America’s most popular television chat shows and toured with Bad Religion. Yet, as tragically proven by Williams’ suicide in 2014, being funny doesn’t always mean you’re happy.

Williams spent time talking to Jamie on the phone about his struggles and, on the day Jamie told his wife he was giving up comedy due to his depression, he ran into the actor whilst out at the theatre.

“I ran into Robin whilst in the queue to pee at The Book of Mormon. We were already friends and he really wanted to meet Allie so I walked him over and he touched her face and told her to never let me quit. It was like he knew.

“Here was this guy, who had been through so much, telling me it was okay to feel these things. He felt so strongly about encouraging people who were outsiders. He emailed me and said, “Anything I can do to keep the flame alive, let me know.” For some reason, he thought what I was doing was important. The reason he knew what to say was probably because he was going through it too.”

Jamie’s show, Sober Song Rants and a Cat Story, opens at Stand in the Square this evening. He’s currently in the middle of recording his first album with a full band (hence the shorter Fringe run!) and has decided to add music in alongside his infamous rants, resulting in a show he can be genuinely proud of.

“When I performed at the Fringe before, I think I was trying to be edgy instead of just being myself,” he explained. “This is the most ‘me’ I have ever felt. It’s still political but I’m not above talking about when I fuck up and I have a guitar with me as I’ve always wanted to be a rock star more than a comic.

“The Edinburgh Festival Fringe is where I first realised that I’m not crazy for wanting to do this. I love how you’re surrounded by brilliant people with the same dream. I want audiences to laugh but I also want them to get riled up, get mad, make art or speak up more.”