For the local actors making their professional Fringe debut in The MGA Academy of Performing Art’s production of Zanna, Don’t!, bringing the show to sold-out audiences at the world’s largest arts festival reflects both a personal triumph and professional success.

The Off-Broadway musical, running at C Venue on Chambers Street until August 30, aims to use comedy and music to help tackle homophobia and discrimination. The upbeat musical is set in a parallel universe where being gay is considered normal, the chess champion is the school heartthrob and the question on everyone’s lips is whether or not straight people should be allowed to serve in the military. 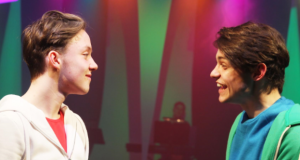 The thought-provoking show, which has been produced by Beyond Broadway Productions, features a host of aspiring stage superstars from The MGA Academy of Performing Arts in Edinburgh.

Thomas Docherty, who has been training with The MGA Academy of Performing Arts for six years and has recently been signed by leading London agent Olivia Bell Management, has been cast as male lead Steve Bookman. The 20-year-old, who is a former pupil of The Royal High School, explained, “My character is initially gay and has a boyfriend before turning straight and having a girlfriend. It’s an ‘opposite’ world, contradicting real life where people may ‘come out’ as gay.

“Mine is a tough role to play: in real life, I am straight, so kissing a boy – Jack Nixon, who happens to be my best friend – was a strange experience, but you just get on with it. I know that, having had that experience, if I have to play that role again, it will be much easier.

“Through our performance, we would like the audience to take home the thought that people should be accepted for who they are, that it’s dangerous to make judgements, and that sexual orientation is not a choice. People who have seen the show so far have become quite emotional during the performance – it’s great to see that our portrayal of the characters can touch people like that.”

Thomas, who is from Cramond, added, “After the Edinburgh Festival Fringe, I will head to London so I can attend show auditions – it’s a very exciting stage of my career.” 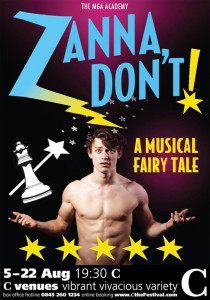 Drew Gowland, Theatre Director and Managing Director of The MGA Academy of Performing Arts, said: “We wholeheartedly believe that theatre should be used for social change so are delighted to be staging Zanna Don’t! at the Edinburgh Fringe Festival. The show is perfect for the Fringe as it is quirky, fun, camp and enjoyable but it also conveys a strong message to which many people can relate.”