Award winning actress/comedian Sajeela Kershi has two shows on the Fringe this year. The hard-hitting Immigrant Diaries is storytelling and stand-up provided entirely by a group of immigrant performers, while Shallow Halal is her one-woman show.
AAA caught up with the  hugely likeable comedian earlier this week.

I arrived in Edinburgh in agony due to putting my back out, so I’m pacing myself. I’ve had to learn the hard way that you can’t do shows and go out till the early hours, as it does take a toll not only on your health but your performance. So for now I’m focusing on bedding in my shows, trying to eat properly and go home and rest.

Immigrant Diaries: the light hearted antidote to the anti immigration rhetoric. The Edinburgh Fringe is full of performers and punters with immigrant heritage, so every night you get a rotating line-up from a multi-cultural Fringe. We’ve already had some awesome guests on and for some acts it’s going to be the first time ever they will be telling their story live to an audience, so the show really is quite special and a unique experience. The show is for anyone, irrespective of whether they are of immigrant heritage or not.

Shallow Halal: almost a sister show to Immigrant diaries – where ID attempts to shine a positive light on immigrants via true stories from myself and my guests, Shallow Halal is a stand-up storytelling show which addresses faith, mainly Islam/Islamaphobia as a direct result of nutters hijacking the faith I happen to have been born into.  The show looks at how and why we have a faith, about my own issues with religion and why I define myself as a Muslim agnostic in agony sitting very firmly on the faith fence.

My entire body of work deals with identity, religion, fitting in. Immigrant Diaries was actually born at the Edinburgh Fringe in 2012 – the year of the Olympics when there was a wonderful atmosphere in the UK and yet I returned from one of the most multi-cultural festivals in the world to hear more derogatory anti immigrant stories in the news. I wanted to give a voice to this press-manufactured immigrant phantasm. So the only rule of Immigrant Diaries is that the stories must be true. The audience have reacted very positively to an act sharing something so personal. It’s a great show that has had sell-out run at the Southbank London, the Brighton Fringe and I was even invited to perform it at the House of Commons. Re: Shallow Halal – I got really sick of Muslims getting homogenised as one, as terrorists, would-be terrorists, or terrorist sympathisers, as was the case when I announced on social media that I felt uncomfortable using the #Jesuischarlie hashtag post Charlie Hebdo incident. I was vilified and told if I didn’t use the hashtag I was siding with extremists, and that I was somehow against freedom of speech. Wtf? Shallow Halal is my response to stuff like this.

It might sound arrogant but Immigrant Diaries is a consistently good show. I’ve done it in various guises for three years now, so I know it works. We’ve had some great five-star reviews for it, and even won awards. Shallow Halal – I’m still tweaking the show but the audience reaction has been really positive – they ask me if the stories are true, and I’m like ‘everything I say on stage is based in the raw truth’.

ID – There are indeed thousands of shows, many compilation shows, but only one show where you get to see a rotating line-up of guest immigrant performers at the Fringe telling you a true story possibly for the first time. There is nowhere on the Fringe you will get a show like this.

SH – There are a few Muslims bringing shows to the Fringe this year about faith but mine is in the free Fringe, so not ‘forking out’… OK, so you have to make a donation at the end (we suggest £5), but take a punt on something you might not see otherwise. 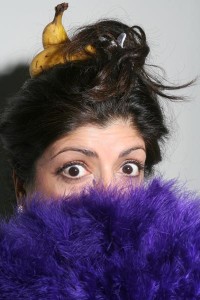 I really want to see the Wrestling, I went the first year and it was an electric night out. I also want to catch some theatre and crazy shows that I would not normally go see.

An Asian family who came to my show and ate their packed-lunch lied about the kids ages (my show has a 14 + age on it). I kept getting heckled by one of the kids toy minions! Does Shallow Halal look like a picnic spot people?