In her highly anticipated debut hour, titled Sarah Callaghan: Elephant, this refreshingly honest rising star discusses small worlds and trying to break free. Expect sharp observations from this raw, gutsy new talent at this year’s Fringe.
AAA caught up with the twenty-something Londoner for a chat.

Banging. I’m selling out at the Pleasance with 4 and 5 star reviews and have played the Edinburgh Playhouse. I’m keeping my feet on the ground obvs, that said those feet are being pedicured by my new butler.
It’s about being trapped in life and in my small bedroom living at home with my mum. It’s stand up, and I’ll say this for hopefully the last time, I am not a character act! This, for good or bad, is the real me! I am not the female Lee Nelson and I have no desire to chuck money over Sepp Blatter, mainly coz I’m skint.
I did a few bits and bobs as a kid while still at school. People laughed at me on stage which was a more positive thing than most people treating me like shit off it so that encouraged me. 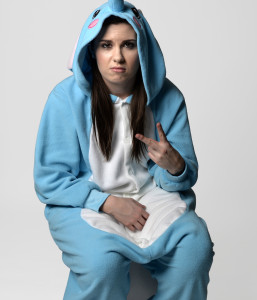 Great. What really pleases me is it is a show that can entertain the old and young and everything in between. As you’ll find out in the show, I love the people 50+ that come to the show, lots of bits are specially for them!
Well, it’s obviously crazy to compare comedy shows of different types and certainly impossible to compare shows of different genres but that said if your going to invest your time and money on a show its obviously got to be mine as its by any measure the best! Ha!
Charlie Baker, Nathan Cassidy, Phil Jerrod and David Mills are all fantastic.
Luke McQueen and the Ladyboys of Bangkok.
I’ve had one day off and obviously I’ve gone to the zoo! I literally couldn’t imagine going anywhere else. I love zoos. I’m gonna work in a zoo if comedy doesn’t work out. I’ll do my sets to the animals instead. Those hyenas are a very easy gig.
Hotel du vin. Poshest place I’ve been in my life but staff are well nice and food is amazing. I tried a creme brulee for the first time in my life and completely lost my shit. What have I become?

“I have no desire to

That’s easy. I won’t name the act because that would be unfair. 1.30am a tiny room rammed with people and a very shall we say tired standup. Turned into one of the strangest and greatest gigs ever. After every bad joke and there were quite a few the audience shouted out a random word and everyone cracked up. There was more laughter in that free gig than any other I’ve ever seen and people were piling in tenners into the bucket. Incredible!
People laughed when I said stuff. Don’t take this the wrong way but these questions need to get more tricky. This ain’t a very hard exam.
No innit. I was never the class clown. I was funny but in a classy way obviously – so the classy clown.
Yes. Try in real life asking someone what they do for a living and then taking the piss out of the response. You’ll get punched in the face.
I watched VHS comedies as a kid – I liked French and Saunders; the old comedies were the best and I’ve still got all the tapes and the player. It’s like living in a fucking museum! And comedians who I gigged with inspired me when I started off, the one or two that cared about me when I was a nobody. Its nice to know certain people saw potential in me and what could be achieved with hard work and determination.
Sarah Callaghan; Elephant, Pleasance Courtyard (Venue 33), until 30 August, 5.50pm, £10 (£8), 0131-556-6550, www.edfringe.com