On Friday, August 14 at the Fringe, football fanatics are invited to join Ron Ferguson, author of the cult classic Black Diamonds & the Blue Brazil, and Tom Maxwell, author of The Lone Rangers and The Fabulous Baker Boys, in an hour of angst, passion and love as they discuss their relationship with the beautiful game. Ahead of the event, AAA caught up with Tom…

You’re appearing at the Fringe alongside Ron Ferguson – can you tell us a little about the event?

The event is called ‘A Beggar for a Miracle: A Fan’s Life in Football’, which is being held this Friday, 14 August as part of the Edinburgh Book Fringe. It’ll be an hour of football chat with myself and Ron Ferguson, who wrote the cult classic Black Diamonds and the Blue Brazil, which is about his lifelong obsession with Cowdenbeath. My first book, The Lone Rangers: An English Club’s Century in Scottish Football, is about my own love affair with Berwick Rangers – so we’ve a lot in common! 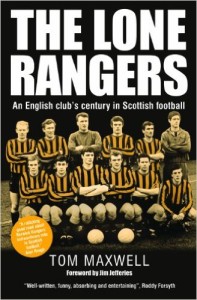 What’s your relationship with the beautiful game? When did you first get interested in football?

Although I’m a Berwick fan, the very first match my Dad took me to see was actually a 0-0 draw between Dundee United and Aberdeen in 1987! Suffice it to say, it wasn’t that particular game that sparked my interest. It was three years later, watching England reach the semi-finals of Italia 90. Quarter of a century on and I’m still waiting for them to return to those dizzying heights. 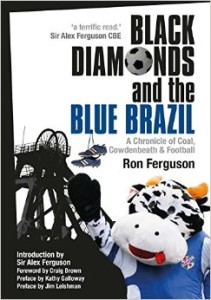 Have you read Ron’s book? I have! Interestingly, when I first pitched The Lone Rangers to my publishers, Ron’s book was the one I cited as being a similar – and successful – title about what it’s like to support a lower-league club. I think I owe Ron a pint.

You’ve published two excellent books yourself – The Lone Rangers and The Fabulous Baker Boys: The Greatest Strikers Scotland Never Had, about siblings Gerry and Joe Baker – can you tell us a little about each?

Confused national identity plays a big role in each. Berwick are the only English team to play in the Scottish Football League, while Joe and Gerry Baker, despite both having broad Scottish accents, represented England and the United States respectively. In theory, I could represent England or Scotland, but I’m yet to receive the call.

Following a team like Berwick Rangers must have more lows than highs – why put yourself through that?

When I was a kid I had flirtations with Manchester United, Newcastle and, bizarrely, Aston Villa, but Berwick was the team I came back to and the only one I saw on any kind of regular basis. When you move away from your home town that affinity becomes even stronger. At university in Stirling, someone had cut out a newspaper headline that read: “They called me the George Best of Berwick” and stuck it on my door – I loved that! You’re right, they’re not the most successful team, but that makes their occasional victories taste all the sweeter. 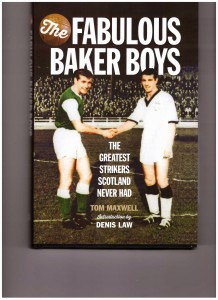 The Fabulous Baker Boys contains interviews with Denis Law, Lawrie Reilly and Bob Wilson, to name but three – it must have been amazing to chat to these guys. Of all the people you interviewed when researching the book, who made the biggest impression on you?

Denis Law was great and was good enough to provide the foreword, Bob Wilson was a gentleman and I felt privileged to get the chance to chat to Lawrie Reilly before he died. But the person I enjoyed speaking to most was Gerry Baker – just to hear his first-hand accounts of growing up with Joe, of scoring a record ten goals in a Scottish Cup tie and of playing alongside some of the legends of the game was a real thrill. He also had a brilliant sense of humour, and I was gutted that he died literally a couple of weeks before the book came out. He’d read it, however, and said every word was true. That meant a lot.

Will your next book be football-related – or do you have something else in mind?

I’d love to get into fiction and I’ve been working on a few ideas, but I could well do another football book. It’s something I really enjoy and there’s definitely an appetite for it.

You’re a big fan of cricket, Tom. Please don’t tell us you have a cricket book in you?

As much as I’m enjoying the afterglow of England’s sensational Ashes victory, I think I’ll stick to football books.

The Fabulous Baker Boys: The Greatest Strikers Scotland Never Had is released in paperback on Thursday, 13 August. Published by Arena Sport, £8.99. To find about more about Tom and his writing, visit www.tomfmaxwell.com