Canadian comedian Tom Stade has been one of the highlights of the Fringe for about 10 years. He matches insight and honesty with a genuine showman’s streak – he’s a  born entertainer, in other words. AAA Edinburgh caught up with him recently, and we highly recommend you do the same.
For the past six years, Stade has lived in Edinburgh, and now feels more like a local than a North American.
“I don’t even feel Canadian any more, I totally feel Scottish,” Stade says. “The only thing that’s still Canadian is my accent.”
He’s playing at the Assembly Rooms this year – his show You’re Welcome runs until August 30. In the middle of a 24-night run, he’s still sounding refreshingly upbeat – doing three and a half weeks’ worth of shows in a row is something he enjoys.
“It’s a good chance to flex my

muscles and test my skills and keep it fresh every night,” Stade explains. “For me it’s more about the audience than myself, I’m more of the setting for their good time. I always keep that in mind.
“I kinda love what I do – I know that’s a cliched thing to say, but I appreciate the fact that we’ve come this far. It’s a nice little balance. There are things I want to say, but it’s more important that the humour comes out. You can get stuck into yourself, thinking you know the way the world works and trying to tell people who live different lives from you the way it’s supposed to work. You can forget about the funny parts of things. I’m trying to tap into the humanity of everything through my life. Everybody’s got their own little threads running, but I try to tap into the main thread so there’s a common bond. I try and make people feel like we’re all going through the same thing, and it should be laughed at – none of this world should be taken too seriously. The older I get the more I believe that.” 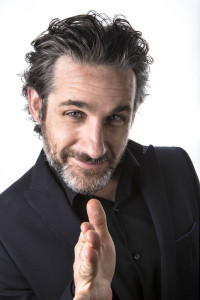 Stade normally writes throughout the year, and road tests his material in clubs a few months before the Fringe starts. Canada’s loss is definitely Edinburgh’s gain in this case.
“When you’ve been doing it since you were 18 years old, my brain sort of goes to the punchline naturally,” Stade says of his writing process.
He’s also more concerned with what the paying public thinks than the critics – not that he’s short of five-star reviews.
“It was a great day today,” he says. “I started reading reviews to see what people think – I’m more concerned about the personal reviews of the shows than the critics, but critics have always entertained me. It’s so funny when you read so many different interpretations of a show. Most great shows are all word of mouth anyway. And sometimes people see things in your show that you didn’t see yourself.”
Earlier this week, Nathan Connolly – the guitarist from Snow Patrol – dropped in to see Stade’s show. They’re fans of each other’s work, and quite the night ensued.
“We had a drink afterwards. It was fun talking to someone who started early too – he was like 20 when he started as a musician. So we had a real common bond about starting early, achieving the things we wanted to achieve and there’s still more to come. It’s always fun meeting someone who went for it – because a lot of people die along the way. They have a dream when they’re 18 and it gets muddled and distracted, so it’s always fun seeing somebody else who crossed the finish line. It was a very good meeting, and we enjoyed a lot of whisky.”
Stade is massively enthusiastic on stage, and he’s the same in person – he doesn’t need much encouragement to wax lyrical about his adopted neighbourhood of Stockbridge.
“I’m a massive fan of Stockbridge. It feels like a village and yet it’s right next to the city. I’m terribly fond of it here. Talking to a lot of the people here, this place used to be a shithole about 50 years ago, it’s where all the drunks came. But the one thing about being a shithole is that eventually artists move in, because they don’t make much money. And then once the artists move in, it gets better. This is Edinburgh’s Greenwich Village, I’m gonna throw that out there right now.”
Tom Stade: You’re Welcome, The Assembly Rooms, (Venue 20), 9.40pm, until 30 August, £15 (£13), 0131-226 0000, www.edfringe.com