Gavin Blackie, winner of Edinburgh’s Got Talent back in 2010, has announced a gig at the Church Hill Theatre in Morningside on Saturday, 26 November.

Get It On Tonight will feature songs from the singer’s debut album, new material and, of course, some festive tunes to kick-start Christmas. 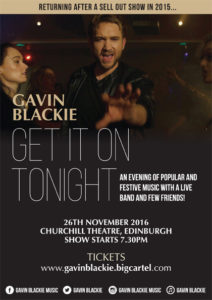 “It’s always the best experience performing to an Edinburgh crowd,” says Blackie, who is looking forward to performing to a lively crowd at a venue he sold out last year.  “The audiences that come to see me are always up for a good night out.

“I love playing live and like to push myself as a performer and try to give something different and more exciting than before. The past 12 months have been such a whirlwind and I’m loving every minute. Getting to play again in my home city is the icing on the cake to a brilliant year.”

Released last November, Laid Bare saw Blackie strive to create an image and album that has been five years in the making. He himself penned every track on the album, which was recorded at Offbeat Studios on Edinburgh’s Royal Mile and produced by Iain McKinna.

“I’m so grateful and happy to be able to present my new album to the world after five years of researching the right material, getting the right producers and finally having the confidence to bare my soul to the public through the album,” he said at the time of the release. “I have gathered up a consistent fan base over the years, but I want to reach out to a wider audience.

“Singing is in my blood and I can’t see me stopping now that I’ve come this far,” he added.

At The Church Hill Theatre in November, Blackie will be supported by fast-rising young Edinburgh singer Carrie Mac.

Tickets are on sale now from www.gavinblackie.bigcartel.com