If there’s one Fringe show that’s going leave you with a smile on your face this year, it’s Get Your Own Back: Live.

The show is based on the popular TV phenomenon, which aired in the Nineties and gave children the opportunity to seek revenge on their parents by putting them through a series of trying challenges before dunking them in a pool of gunge. Featuring water pistols, silly games, mindless jokes, a gunge chamber and even original host Dave Benson Phillips, Get Your Own Back: Live is as wonderfully ridiculous as anyone who used to watch the show would expect. 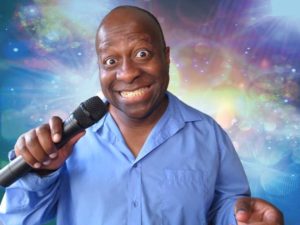 Whilst the nostalgic production is clearly aimed at adults, the humour remains clean and the format stays faithfully true to the original, save for it being on an evidently lower budget.

Two teams, both made up of Fringe performers, compete against each other in a range of strikingly simple yet wildly entertaining games that wouldn’t look out of place at a drunken house party. One minute they’re testing how quickly they can put on a duvet set, the next they’re trying to catch paper plates with metal food tongs.

The real draw here, aside from the disappointingly small gunge tank itself, is the unfalteringly cheery Dave Benson Phillips. His self-depreciating sense of humour keeps the show fresh and funny, whilst the way in which the audience reacts to his cheesy jokes proves just how much affection Nineties kids still have for the undisputed King of Gunge.