In Scottish folklore, Ghillie Dhu was a gentle and kind-hearted mountain spirit, or a rather unusual nature fairy that guards trees. In Edinburgh pub terms, Ghillie Dhu is a West End watering hole that’s warm, welcoming and full of charm.

Situated at Rutland Place, this grand bar’s central location – just a few steps from Princes Street – makes it a popular stop for locals and tourists alike and, with live music every night from 9.30pm onward, it’s often rammed in the evenings, especially at weekends.

As you’d expect from a former church – the building was once the St Thomas Episcopal Church – Ghillie Dhu is very impressive from the outside. Inside, it’s even better – totally atmospheric, there’s winding staircases, high vaulted ceilings lit by chandeliers, and large arched windows. Were you to choose a venue to impress an out-of-towner, you wouldn’t go far wrong here.

Set over three floors, Ghillie Dhu boasts a large auditorium which holds events and can be booked for private parties and weddings, a good-sized bar area with occasional live music, live sports on the big screens, and a restaurant that serves up hearty Scottish fayre made with local produce.

Unusually for a stylish West End bar, they don’t serve cocktails, but there is an impressive selection of whisky, wine and beer on offer. A notable offering is the Ghillie Ale, the bar’s very own cask conditioned craft beer, specially brewed for them by the award-winning Inveralmond Brewery in Perth.
Food options include a selection of pies such as steak and Ghillie ale, mushroom and leek or chicken and ham, cullen skink and black pudding, and locally caught haggis (no, really!) served with neeps, tatties and a whisky cream sauce.

There’s also a Wee Rascals menu, which has plenty of tasty options for kids, who are permitted in the restaurant until 8pm.

Back to the bar area, and the booths with bells are a nice touch, it has to be said – just ring for instant service. 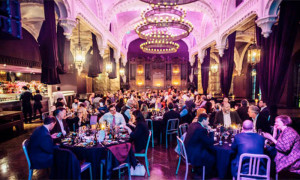 On Friday nights, the Ghillie Dhu hosts its Burly Ceilidh Club, a weekly event that is always rammed and sees punters jigging the night away until the wee small hours.

Dublin post-punks Fontaines D.C. will give fans a glimpse of what