From The Kinks to Kings of Leon, The Jackson 5 to Oasis and dozens more in between, family-formed music groups are nothing new.

Kitty, Daisy & Lewis might not be the first name that rolls off the tongue when talk turns to siblings making music together, but this family affair has earned support slots with a diverse range of artists including Coldplay, Jools Holland, Mark Ronson and Stereophonics, sold over a quarter of a million albums worldwide, and earned an army of A-list admirers from the late Amy Winehouse to Eagles of Death Metal.

Tomorrow night (Feb 2), the talented North London-based trio, who released debut album Honolulu in 2008 when Kitty was just 12, Lewis 14 and Daisy 16, bring their eclectic mix of pop, R&B, psychedelic rock, soul, country, jazz and ska to the Electric Circus – and it’s a gig that’s sure to brighten up another dreich and dreary Edinburgh evening.

In the Capital, Kitty, Daisy & Lewis will draw the majority of their set from third and most recent album, KD&L III, which was produced by former Clash legend Mick Jones, who is a long-time fan of the band. 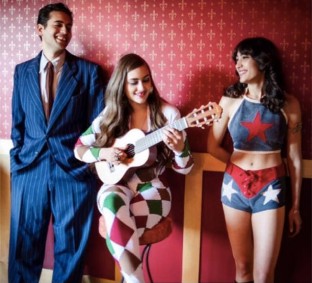 “The album is quite different from our previous two in a lot of ways,” says Daisy Durham, who is the elder of the multi-instrumental trio. “Our songwriting has definitely progressed and we have a lot more life experiences to sing about. We spent three years building a new studio in an old, derelict Indian restaurant in [London’s] Kentish Town. We now have a much larger space to work with, which has definitely helped us to achieve a much cleaner, separated sound. Before, we were recording in a small room at our mum’s house.

“We also got our hands on a 16-track tape recorder, which meant we were able to experiment more with different instruments and vocal art – including string sections, double-tracked vocals and harmonious backing vocals. We knew with this album we wanted to take it to another level in terms of production. We have also introduced more styles of music, from disco, rock, blues, funk to rocksteady. These styles were all developed naturally in the writing and creative part of the process.”

Working with Jones, says Daisy, was an unbelievable experience – albeit a tad daunting at first. “We were a bit sceptical about bringing another person into the equation, especially being a family and such a tight unit, and also working with our own analogue gear. We didn’t really know what someone else could bring to the table as we’d always done everything ourselves. As soon as Mick came to rehearsal for the first time, we loved having him around. He had such a positive energy that really rubbed off on all of us.”

It seems Jones was having a good time, too, considering how long he spent with the trio. “He spent five months rehearsing with us, so he could learn the songs inside out,” says Daisy. “Then throughout the recording process he really helped to keep our spirits high and the music alive.”

Asked what those attending tomorrow night’s gig can expect, Daisy says, “As always, an action-packed show with all kinds of emotions, rhythms and moods.”