A few months back, fans were getting panicky about rumours that Chocolate hitmakers The 1975 were about to announce a break-up after they posted a cryptic comic strip online and later deleted all their social media accounts. As it turned out, nothing could be further from the truth.

In an open letter to the band’s faithful followers, frontman Matt Healy quelled speculation about the split, explaining that their disappearing act was all about starting a “new chapter”, leading to the release of their eagerly-awaited second album, which we now know is due in February 2016.

Healy also reported that the Manchester indie band will begin touring again this month, taking in much smaller, more intimate venues than usual, stating, “The best way to start is the way we did before – in venues we have loved and in places that feel intimate enough to do a proper new show, with people who really want to be there or need to be there in some extreme cases… 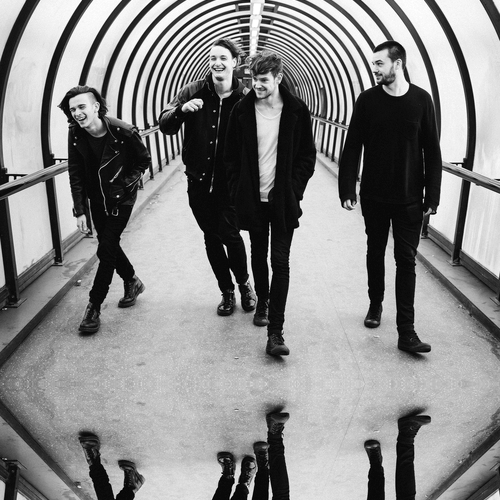 “Due to the size of the venues that we feel are appropriate for this particular tour and taking into consideration the humbling dedication that I have felt from a lot of our fans I predict that only the most dedicated will end up with tickets,” he continued. “This can only be remedied by our reciprocated dedication to playing more and more shows.”

“I’ll see you soon with more music and drama,” he concluded mysteriously. “And you’ve known the title all along.”

Just like Healy predicted, tonight’s (Tuesday, 17 Nov) show at the Edinburgh Corn Exchange is a sell out.

Since that letter, we’ve learned a little more about the 1975’s sophomore album, which is titled  ‘I like it when you sleep, for you are so beautiful yet so unaware of it’.

Speaking to The Guardian, Healy said the band’s newbie will be a whopping 17-track affair, adding that it needs to be so long to take in all his experiences since the band burst onto the scene and became major players.

“I do want to talk about what’s happened in the past three years, and what do you think has happened to a kid who’s gotten in a fucking big band?” he said. “Everything! I’ve done drugs, had girlfriends. I’ve changed! I’m not scared of saying that shit.”

The singer was in outspoken mood throughout the interview, criticising Justin Bieber and having a pop at bands who “pretend they don’t care”.

Healy slammed the Bieb for singing about “nothingness”, adding that the 21-year-old’s No.1 single, What Do You Mean?, doesn’t “inspire” anything.

Recalling an album launch party he attended, he said: “I was a w***er to Justin Bieber. I think he tried to get me kicked out a couple of times.”

Laying into those bands who say they don’t care for fame, Healy unashamedly insisted that he’s doing all he can to be a star.

“I sometimes have a fear of wearing that on my sleeve,” he said. “But there’s no room for shrinking violets, not when everything’s been done.

“The only thing my generation has left is to do things better than they were done before, and you can’t do that if you want to be an indie band who pretends they don’t care so they don’t get judged on being shit.”